Posted by Your Daily Muslim on November 19, 2012 in Anti-LGBT, Clerics, Egypt, Men, Sexism 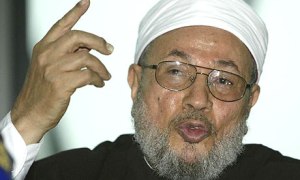 Yusuf al-Qaradawi, making the duckface as made famous by Snooki.

Yusuf al-Qaradawi, also known as the Islamic Todd Akin, is a super old Egyptian Islamic cleric. al-Qaradawi is best known as an author of several books on how to forsake all of life’s pleasures to please an invisible supernatural being. He also hosts a program on al-Jazeera that discusses Sharia law and its applications. He has supported death fatwas against critics of Islam as well as against American troops in Iraq.

al-Qaradawi says that LGBT people and anyone who has sex outside of marriage should be stoned for violating Islamic law. On rape, his thoughts were, “To be absolved from guilt, the raped woman must have shown some sort of good conduct… Islam addresses women to maintain their modesty, as not to open the door for evil… The Koran calls upon Muslim women in general to preserve their dignity and modesty, just to save themselves from any harassment… So for a rape victim to be absolved from guilt, she must not be the one that opens… her dignity for deflowering…”

So, basically, if it’s a legitimate rape, God will forgive you, otherwise you’re guilty of adultery and should thus be stoned. Imagine if this dude were running for office in the US, the media would have a field day with him… oh wait, never mind, he wouldn’t be running as a Republican.

Leave a Reply to Muslim of the Month: November 2012 | Your Daily Muslim Cancel reply