Posted by Your Daily Muslim on November 21, 2012 in Anti-Semitism, Djibouti, Men, Norway, Politicians 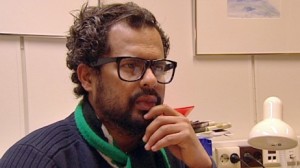 Khalid Haji Ahmed, a hipster Muslim before it was cool.

Norwegian Labor-party (socialist) hipster Muslim Khalid Haji Ahmed recently provided a prime example of Islamic anti-Semitism. One would think, after having lost his brother to white supremacist gunman Anders Behring Breivik in 2011, Ahmed would be opposed to bigotry. But Ahmed had no such revelation, since anti-Semitism is in the Qur’an. Recently, Ahmed wrote “Fucking Jew whores, wish Hitler could come back and shower all you Jews again” on Facebook. When asked about the comment, he tried to pass it off as a joke. Do I smell taqiyya? (Taqiyya is the Islamic doctrine of lying when it is in the best interest of Islam.)

Hey, hipster Ahmed, you may think that hating Jews and supporting Palestinian Hamas terrorists makes you modern or post-modern or whatever your hipster standard is nowadays, but it just makes you seem super 1940’s. Sure, I know retro’s making a bit of a comeback, but that’s a style thing… then again, as a Muslim, you probably hate gays, thus explaining your lack of fashion sense. Dude, get your shit straight before trying to start/jump onto a trend like all your hipster-scum brethren.

(Author’s note: I can’t stand hipsters! They look like anorexic yetis who went to art school and their music sounds like crows being flayed.)

If anyone wants to voice their sentiments to the Muslim himself: