Posted by Your Daily Muslim on November 25, 2012 in Clerics, Iran, Men, Pseudoscience, Sexism 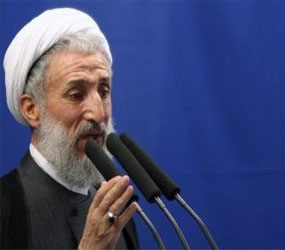 Kazem Sedighi is an Iranian Islamic cleric who has come up with the ultimate scientific explanation for earthquakes: disobedient women are responsible. “Many women who do not dress modestly lead young men astray, corrupt their chastity and spread adultery in society, which increases earthquakes,” Sedighi said. Adultery can cause structures to shake if the sex is awesome enough, but I doubt that was what Sedighi was trying to argue.

Another priceless quote from Sedighi regarding earthquakes: “There is no other solution but to take refuge in religion and to adapt our lives to Islam’s moral codes.” Apparently Iranians would rather die when buildings collapse on them than, you know, learn about structural integrity and how to earthquake-proof their buildings. Sedighi, if you’re so intent on taking refuge in religion as you said… take refuge in a mosque during an earthquake and we’ll see how your plan’s working out. In the meantime, I’ll trust science and modern technological advances.