Posted by Your Daily Muslim on November 29, 2012 in Men, Sexism, United Kingdom, Violence Against Women 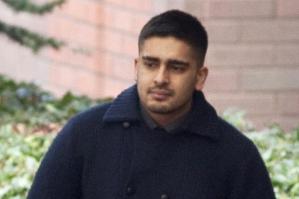 UK Muslim Shamrez (not to be confused with Shamwow) Rashid is the latest in a long line of Muslims who fail to understand the concept of gender equality. Being kinda pudgy, Rashid wasn’t having much luck with women. So, he and a few of his Muslim friends decided to pick up (read: kidnap) two teenage girls, 15 and 16 years old, respectively. They took the girls to a crappy motel and raped them as part of their Eid festivities.

Here’s where it gets REALLY effed: Rashid, in his testimony, made himself sound like some sort of chivalrous gentleman because he and his friends “treated them as guests” while the girls “gave [the Muslims sex].” Talk about being a bad host.

Rashid’s arrogance showed through again during his testimony, when he claimed the girls enjoyed having sex with the men. One problem with that, Rashid: the sex wasn’t consented to, you primitive dipshit! I’ve seen pictures of all those men, and no woman would want to get anywhere near them – they were all fugly as hell and looked like they hadn’t bathed or groomed themselves in weeks!

Rashid and his friends were convicted. Some Muslim onlookers in the courtroom booed and heckled the judge when he handed down his verdict. Rape perpetrated by Muslim immigrants is a growing problem in Europe; in Oslo, Norway, 100% of rapes are reported to be committed by Muslim immigrants… and somehow we’re all supposed to believe that Islam is the religion of peace and respects women. I don’t think I can roll my eyes enough.