Posted by Your Daily Muslim on December 20, 2012 in Anti-Semitism, Israel & Palestine, Men, Politicians 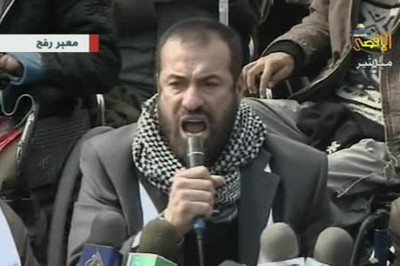 Fatty Hammy is a spokespig for Islamic militant group Hamas. He has spoken in favor of the destruction of Israel several times, and has preached the virtues of martyrdom. Perhaps he should practice what he preaches… alone.

Hammy’s most famous quote: “For the Palestinian people, death has become an industry, at which women excel, and so do all the people living on this land. The elderly excel at this, and so do the mujahideen and the children. This is why they have formed human shields of the women, the children, the elderly, and the mujahideen, in order to challenge the Zionist bombing machine. It is as if they were saying to the Zionist enemy: ‘We desire death like you desire life.'”

When Hammy’s daughter fell ill, he realized only western medicine could cure her, so he temporarily suspended his militant beliefs to ensure the future jihadi he was rearing wouldn’t die. Instead of thanking the Israelis who treated her, he continued yelling about how Jews are evil: “The Jews have become abhorred and loathed outcasts, because they live off corruption and the plundering of the peoples – not only the Arab and Islamic peoples, but all the peoples of the world. The world has begun to be aware of this corrupting danger, and to applaud Hamas. The entire world says: ‘Bravo, Hamas, for confronting these people of corruption’…Hamas will receive its means of survival, its arms, and its supporters from where it is least expected, because the hatred for the Jews is on the rise.”

In addition to being on a Palestinian legislative council and running Hamas TV channel al-Aqsa TV, Hammy also operates a charity. His charity, Waad, offered $1.4 million to anyone who captured an Israeli soldier alive.