Posted by Your Daily Muslim on December 22, 2012 in Anti-Semitism, Clerics, Jordan, Men, Terror-Related 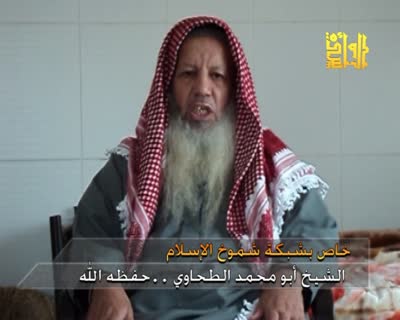 Is he wearing a picnic blanket on his head?

Abed Shihadeh al-Tahawi is a Jordanian militant cleric with some very disturbing and geographically-inaccurate views. He claims that Palestine stretches “from the river to the sea” when in reality, it’s argued to be a small region of Israel. A radical Salafist, al-Tahawi has mentored al Qaeda leaders like Abu Muhammad al-Maqdisi and Abu Mus’ab al-Zarqawi. His beliefs place emphasis on martyrdom for the sake of Islamic conquest. One little logical flaw with that: if most Muslims blow themselves up, who’s gonna be left to rule the caliphate? Who’s gonna be left… at all?

al-Tahawi once addressed bin Laden, saying that the U.S.’ reign was over and that bin Laden would set foot in the White House. Thankfully, al-Tahawi is an idiot who never gets anything right.

al-Tahawi was arrested in 2005 and sentenced to three years behind bars for helping recruit jihadis to blow up U.S. and Israeli embassies in Jordan. A year after his release, he was arrested again for turning his son’s wedding into a pro-jihad rally. This shouldn’t be surprising, as nothing is sacred to Muslims aside from their pedophile prophet (pigs be upon him) and their females’ ninja outfits. At the wedding/rally, al-Tahawi read a gruesome poem that described the murder of former president George W. Bush. Yes, this was at a wedding, an old dude got up in front of everyone and started praising 9/11 and talking about the mutilation of a former U.S. president. While not the lowest a Muslim has gone, that’s pretty damn low.

After his latest release, al-Tahawi was asked to speak at the funeral of a jihadi who made like the theme song of Islam (Ke$ha’s “Blow”), stating: “We tell Benjamin Netanyahu, the [Israeli] prime minister, get ready. The army of the prophet Muhammad is coming your way. Those carrying explosives in Syria, Iraq, Afghanistan and Pakistan will find you, Allah willing.” He then went on to call the U.S. the “mother of all terror in the world.” Like his other statements, this is completely inaccurate – the U.S. can’t be the mother of all terror since it isn’t full of Muslims.

One comment on “Your Daily Muslim: Abed Shihadeh al-Tahawi”