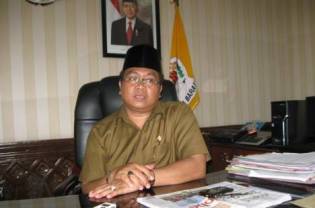 Ramli Mansur may or may not be braindead.

What happens when you’re short, fat, and Muslim? You get creepy. REAL creepy. Ramli Mansur serves as proof of this. The head of Indonesia’s North Aceh Regency, he has managed to attain some level of local political prominence. Using his authority, he has helped instate and continue sharia police programs in the region and, instead of fighting crime, has had policemen go around telling women how to dress.

“It puts the bedsheet on its body…” is basically Mansur’s motto. He initiated a campaign in 2010 to give long skirts to women who would otherwise wear pants. In an interview, he is quoted as saying, “Let me ask you a question. What do you think when you see a woman’s round shapes?” When the interviewer responded saying that Mansur’s belief that women wearing tight jeans would lead to them getting raped was ludicrous, Mansur replied: “Ah, but that’s because you are used to [seeing women in tight jeans]!” Its’s pathetic how the thought didn’t cross his mind that perhaps he is the one who needs to get used to women’s liberation instead of trying to force Islam on women’s lower bodies.

“Obviously, there is a problem with sexy dressing. We see that rapes take place in big cities where free access is allowed between different sexes. Here the economy is small and we don’t want it to be like that.” No, you idiot. Rapes take place when men are desperate, horny, and base their values on a 7th-century book about a barbaric pedophile warlord. In the west, most men have the decency not to rape, and respect women’s dignity and freedom. Mansur even goes so far as to say that women who dress in modern clothes or who are attractive “are asking for rape, including gang-rape.” Clearly Indonesia has quite a bit of catching up to do to be considered civilized.

Mansur’s sharia police take women caught wearing jeans to morality classes in which they are instructed on the sharia. They are then told to report all violations of sharia they see to police. Mansur even instructed police to cut up women’s jeans and give them a bedsheet as a replacement garment. Needless to say, Mansur will be alone with the company of his hand for the rest of his life.