Posted by Your Daily Muslim on February 10, 2013 in Clerics, Egypt, Men, Sexism 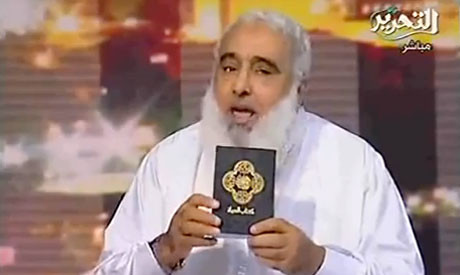 Ahmad Mahmoud Abdullah, also known as Abu Islam, is the latest in a long line of Islamic clerics who want to be douchier than Mr. “legitimate-rape” himself, Todd Akin. Abdullah is a sheikh who resides in Egypt, and he is known for giving televised speeches and sermons. In one such recent speech, he claimed that female anti-government protesters went to Tahrir Square not to protest, but to get raped because they wanted it.

Tahrir Square is a chaotic place; it’s where CBS reporter Lara Logan was raped by a mob while covering the Egyptian revolution. YDM featuree Mona Eltahawy was also gang-raped there. Protesters are often taken aside by troops and government militias and interrogated (read: tortured.) Some are never seen again. Abdullah claims that female activists risked everything not to protest against the corrupt Muslim Brotherhood government, but to indulge their rape fantasies.

Abdullah continued, calling female activists “devils” and commanding them to respect their femininity, in other words, wear the hijab. “90 percent of them are crusaders and the remaining 10 percent are widows who have no one to control them. You see women talking like monsters.” Crusaders? Honestly, I think Abdullah’s still stuck a few centuries behind even the crusades. As for women talking like monsters, a monster like Abdullah has absolutely no right to criticize.

One comment on “Your Daily Muslim: Ahmad Mahmoud Abdullah”