Posted by Your Daily Muslim on February 23, 2013 in Failed Terrorists, Men, United States 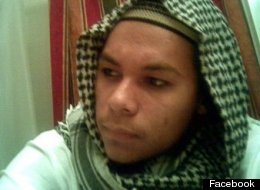 Muhammad Hussain, born Antonio Martinez, is a Muslim convert from the United States who felt the best way to show his faith in Allah was to blow up military recruiting centers around the Baltimore area. While Baltimore is kind of shitty and its sports teams are largely irrelevant, blowing buildings up is still a douche move. Martinez, upon his arrest, would not stop humming Ke$ha’s “Blow,” the explosive theme song of Islam.

Hussain had contacted other jihadis online to organize the plot. However, he wasn’t particularly bright since one of the first folks he decided to work with was an undercover government agent. The agent provided him with explosives, a detonator, and even a van. Though Hussain was undoubtedly tempted to use the van like the prophet Muhammad (pigs be upon him) would have and hand out candy to small children, he continued with the bomb plot. He had said his motive was “to send a message that all American soldiers would be killed so long as the country continued its war against Islam.” The only reason for a war against Islam is because Muslims continually behave like Hussain and refuse to accept basic concepts of civility and human rights.

Needless to say, after trying to blow up a recruiting center, he was immediately arrested. Just like Quazi Mohammad Rezwanul Ahsan Nafis, the taqiyya began shortly after his arrest. Hussain claimed he had “renounced the misguidance of terrorism” and that “all [he] had was a religious zeal.” Riiiiiiiiiight. So, you get so religious that you decide to kill a ton of people for your god, then suddenly have a change of heart once you get caught? I bet he still has that religious zeal, and is probably gonna try to evangelize to his cell block buddies in prison.