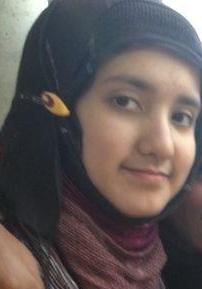 I did some more digging and updated the post accordingly.

Muslims are very strict parents, and raise their children to do the bidding of Allah. Aershey (not to be confused with the prophet Muhammad’s child bride, Aisha) Noor Khan and her little brother Asher are no exception. The Khans’ parents made it their family’s jihad to get rid of the counterjihad page Allah Sucks. Teenage girl Aershey apparently started a petition on notoriously-leftist causes.com called “Remove the disrespectful page ‘Allah Sucks’.” So far, the petition has garnered the support of every rabid Muslim who harasses the folks at Allah Sucks, but has gained little traction otherwise. It has also recently managed to attract the attention of the online counterjihad community.

Asher Khan, who doesn’t look a day over 10, has also been seen calling upon Muslims to report counterjihadists… when I saw Asher’s posts, it clearly wasn’t the writing of a young boy – I figured out this wasn’t a case of children waging jihad, but parents using their children to do so. No one wants to argue with or hurt the feelings of a child.

Aershey’s account says, “People who think they can get away with it by using a [Facebook page] for racism is just wrong.” Lemme ask you something: what race is Islam? If you look through the archives of this site, you’ll see black Muslims, white Muslims, Asian Muslims, you name it. “Why are there people who think, they can get away by making racist pages against one particular religion?” So now religions have races. Makes total sense. Just like how it makes total sense for a ten-year-old boy and his older sister to spend their time online creating petitions and harassing counterjihadists… riiiiiiiiiight.

“This is a peaceful cause which involves peace but the goal to remove the page.” Yep, because silencing the opposition is totally peaceful, just like how jihad is peaceful and Islam is the religion of peace. If only Aershey’s mother’s brain were developed enough to realize how much of an idiot she is… then again, she is Muslim, and exposure to high levels of Qur’an radiation has a stunting effect on intellectual development.

“It’s important to me because I believe in Allah and Islam, and I can’t just sit here, I have taken the pledge, and whoever reads this, do so too.” Apparently we’re supposed to believe a ten-year-old boy wrote that…

“By [signing the petition] you can beat the Satan and the person who made this dreadful page. I have seen this page and I can tell you it’s dreadful. By helping me you can earn reward for the after life. Just think… how much you love Allah.” Liberal “slacktivists” are widely known for spamming causes.com and change.org petitions all over Facebook without ever actually getting outside and making real demands for change. “Aershey” is basically their hero – she’s Muslim and she’s telling them their efforts are worthwhile. Of course, that doesn’t change the fact that the slacktivists don’t groom themselves and thus look like yetis.

Aershey’s parents sent her to a Catholic school. There, she is no doubt proselytizing (dawah) to her kafir (infidel) classmates. It is unknown where Asher attends school.

After a short period, Aershey’s parents updated the description of the cause with (you guessed it) a threat. “Does [the Allah Sucks admin] not know the consequences, in which Allah has decided? Does this person think he has gotten away with it? Surely no one will save him in his grave.” If a non-Muslim were to post such a thing online, it’s quite possible it would get investigated as a threat. But being sensitive to Muslims apparently takes precedence over making them shut up, get with the times, and obey our laws. I wonder if either of the Khan children know what their parents have been doing with their online presence… let this serve as a lesson to everyone: don’t give your parents your Facebook password!

One comment on “Your Daily Muslim: The Parents of Aershey Noor Khan and Asher Khan (DAILY DOUBLE!)”