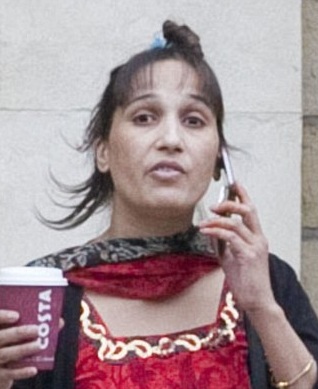 Growing up ugly can’t be fun. In the case of Pakistani Muslim Asia Parveen, the psychological scars from such a childhood cut very deep. Though she had abandoned the Islamic ninja costume after moving to the UK, she hadn’t abandoned the seventh-century belief system. A mother to a ten-year-old girl and five months preggo with another child, Parveen realized her daughter would grow up to be far prettier than her. Savage jealousy began to swell up inside her.

One day, Parveen’s daughter didn’t recite as much of the Qur’an as her mother expected. It was probably the part where Muhammad banged his wife that was a year younger than her, which made her feel quite reasonably uncomfortable with the book. Parveen’s daughter refused to continue reading. In a fit of rage and jealousy, Parveen tried to prevent her daughter from ever being beautiful – she picked up a steel ladle and beat her daughter with it 57 times. She then threatened to kill her daughter, but the girl managed to flee.

When arrested, Parveen blamed her hormones. I’ve heard stories about women using pregnancy as an excuse for all sorts of far-out behaviors, but this is just beyond any stretch of the imagination. Parveen claimed that the Ramadan fast was part of the reason for her hormonal imbalance. Hmm, maybe if something screws up your health, you shouldn’t do it. I think that’s called… oh yeah, common sense.

Parveen will soon be released from jail after serving a 9-month sentence.