Posted by Your Daily Muslim on March 9, 2013 in France, Muslim of the Month, Terror-Related, Women 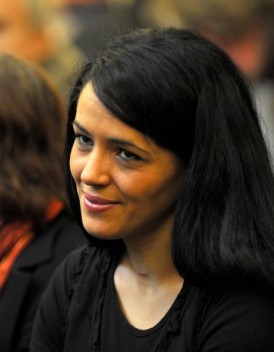 She’s not crazy. At all.

French Muslim Bouchra Bagour is a master of taqiyya, the principle of lying to advance Islam. Douchera, like Elfi Yaghi, named her son Jihad, who is now three years old. Jihad was born on September 11. Always ready to fight for Islam, Bagour sent jihad off to preschool wearing a shirt that said “I am a bomb” on the front, and “Jihad, born September 11” on the back.

The French are very proud of their culture, snail-consumption, hideous moustaches and all, and didn’t take Bagour’s choice of attire for her son well. She was arrested and is facing a charge of glorifying crime. Here’s the kicker: she claims she had no idea the shirt would be considered offensive.

Well, for one, Bitchra, maybe you shouldn’t have named your little Muslim baby “Jihad,” especially considering the day on which he was born. Or maybe you could’ve celebrated his birthday on his birthday, and not paraded it around like you’re celebrating 9/11. Or maybe, just maybe, you couldn’t have caused a justified panic when you sent your little Muslim baby named Jihad to preschool wearing a shirt that says “I am a bomb” on it. It doesn’t matter if you think you’re 90’s and you want to bring back the slang expression “da bomb.” The slightest mention of any explosive by a person named jihad is cause for immediate concern. 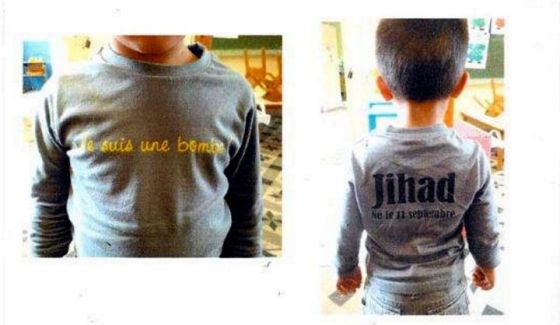 Update: this one has a happy ending after all. On September 20, 2013, Bagour was convicted of justifying/glorifying a terrorist act. She was fined approximately €2,000 and handed a one-month suspended prison sentence.