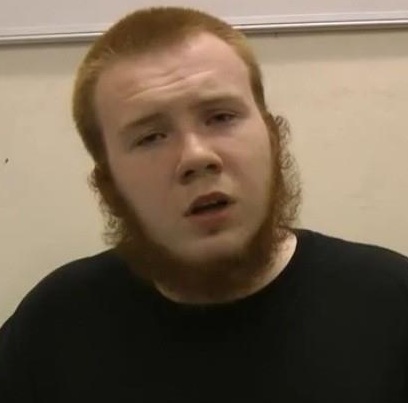 Eating pigs is haram, but what about being a pig?

After being turned down by even the girls on the short bus, Uddin realized his life needed to change. Realizing he would never find a woman to love him, he found a copy of a child-porn fairytale called the Qur’an and started reading. After several sessions with the book and his hand, he was like, “this shit is awesome!” It was then that he turned from an outcast slob to a – wait, he’s still an outcast slob.

Uddin has stated that he believes that Saudi Arabia is more westernized than Britain. Yep, because forbidding women from driving is such a western thing. Before completely losing his mind and turning into a wannabe Muslim Patrol member, Uddin admitted he did “what a normal kuffar (infidel) does” like smoke weed, drink, and interact with girls though they immediately turned away in disgust. He realized that the munchies weren’t helping his waistline so he stopped smoking for his own health. He’s still absolutely hideous, though.

Jamaal’s grandmother told him that during her adolescence, homosexuality and prostitution were looked down on and were seen as diseases. He explained his view on the subject: “And now all of this is completely normal in today’s society. If we let the society go on like this, there will be no solution, so that is why it is inevitable Islam will dominate the world.” No solution to what? People being able to love who they want to? Islam is a religion of tolerance, surely it wouldn’t discriminate against homosexuals…? Uddin’s homophobia, possibly rooted in latent bisexuality, has also manifested itself in “sharia-controlled zone” posters he put up around London that forbid drinking, gambling, and pornography (except the Qur’an.)

Uddin was a member of Anjem Choudary‘s pro-sharia group, Muslims Against Crusades. The British government banned the group after some of its members were found preaching hate. Uddin commented: “They (the British government) say I preach hatred… and I say love the Muslim brothers and hate the kuffars. That is what Allah has told us, so when I say this I become an extremist?” Actually, Uddin, yeah, you do. No other religion commands its followers to isolate themselves from everyone else. Any ideology that is so blatantly anti-integration should be condemned as such. Uddin is an extremist. Islam is an extremist ideology.