Posted by Your Daily Muslim on March 18, 2013 in Anti-LGBT, Clerics, Iran, Men, Politicians 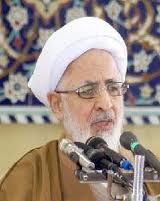 Wizened well past his prime, Iranian Grand Ayatollah Abdollah Javadi-Amoli felt like lashing out at those he was most jealous of: gays who still had a chance at getting laid. A former prayer leader and politician, Javadi-Amoli was no stranger to public affairs, but was met with international outrage when he criticized individuals’ private affairs.

“If a society commits a new sin, it will face a new punishment,” Javadi-Amoli is quoted as saying, basically trying to justify changes or “enchancements” to the sharia. “Problems like AIDS did not exist before.” Why is it that Muslims ALWAYS bring up AIDS when discussing gays? Not every gay man has AIDS. In fact, the vast majority don’t, but Muslims try to vilify gays however possible, often using lies and distortions. The horrific crime of loving someone of the same sex is punishable by death in Islam.

“Dogs and pigs don’t engage in this disgusting act [homosexuality] but yet they [western politicians] pass laws in favor of [homosexuals] in their parliaments.” Actually, dogs do engage in gay behavior, it’s been documented. Dogs also don’t blow themselves up for Allah, so by Javadi-Amoli’s logic, Muslims shouldn’t either.

That quote of Javadi-Amoli’s reminds me of a “debate” I had with a Muslim who messaged the YDM Facebook page. I provided the Muslim with scientific arguments that homosexuality is natural and occurs in all sorts of animal species, and he continued vomiting Javadi-Amoli-esque statements and concluded with “the gays shouldn’t exist.” Needless to say, Islamic “logic” is driven by blind fervor and attributes no value to firsthand accounts, experiences, or contradicting evidence – those things are un-Islamic, from the evil Shaitan, or what have you. And so we see Islamic scholars like Javadi-Amoli pushing their seventh-century bile since reason has deserted them.