Posted by Your Daily Muslim on April 5, 2013 in Men, United States 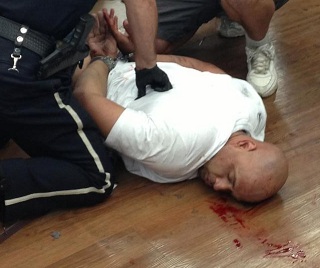 What happens when a Muslim gets high on drugs? Apparently, rampant destruction and chaos. Hammy Zaid, of San Jose, California, took so many drugs he could probably see Allah. Then he got in his car and went on a destructive rampage.

Zaid’s target was a Wal-Mart. Known for its customers so wide they can’t fit through the aisles and unique ghetto-stank scent, Wal-Mart attracts tons of classy patrons. In the parking lot of the upstanding establishment, Zaid drove around in his Oldsmobile Cutlass, crashing into parked cars. When he decided he’d had enough of that, he drove right on through the front doors of the store. Frightened patrons tried to waddle away in panic as fast as their monstrous blubber-cysts of legs would let them.