Posted by Your Daily Muslim on April 12, 2013 in Anti-LGBT, Men, Political Islam, Syria 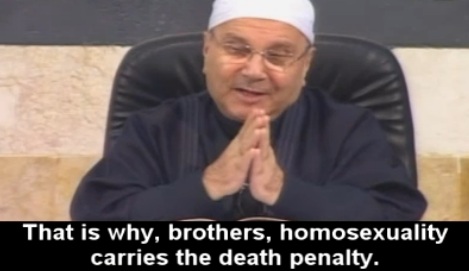 “Do you think we [Muslims] can get along with [gays’] lifestyle? This is impossible.”

Syrian Islamic scholar Muhammad Rateb al-Nabullshit is yet another in a long line of Islamic homophobes that make Fred Phelps look like Perez Hilton by comparison. al-Nabullshit’s hatred of gays does not come from failed attempts at sexual experimentation – it comes from the Qur’an and Hadith, which state that homosexuals are cursed and should be executed per the orders of the prophet Muhammad, pigs be upon him.

“Homosexuality involves a filthy place, and does not generate offspring. Homosexuality leads to the destruction of the homosexual. That is why, brothers, homosexuality carries the death penalty.” Why kill people who are supposedly destroying themselves anyway? If they’re already doing it, why would you waste your time and energy helping them along? Oh wait, there isn’t any destruction going on, just hatred and homophobic bigotry. However, Muslims sure are responsible for tons of destruction, including self-destruction. Maybe we should execute them all because they’re going to destroy themselves? Hmm? Not too keen on that idea, are you, al-Nabullshit? As we can see, the hypocrisy of Islam rears its ugly head yet again.

“We are extremely lucky in our countries. When the head of the [Islamic] community in Australia came to bid me farewell at the airport, he began to cry, and said: ‘Tell our brothers in Syria that the garbage heaps of Syria are better than the gardens of Australia.’ When I asked him why, he said: ‘There is a 150% chance that you will see your son with an earring in his right ear.’ This means that he is a homosexual. If he wears an earring in his left ear, it means something else, because there is an active homosexual and there is a passive homosexual. Earrings in both ears is the worst: 150% chance of homosexuality.” 150% chance? Tell that to all the Muslims who claim that Muslims are the forefathers of modern mathematics and try not to get slapped. Sure, some gay people wear earrings in their right ear to show their orientation… but that trend died out in the 80’s and any gay man who still does it today probably can’t even get it up anymore. Also, al-Nabullshit, the terms are “pitcher” and “catcher” or “top” and “bottom”, not “active” and “passive.”

al-Nabullshit has stated on his website that nations which abandon the principle of jihad are doomed. He claims that Allah will humiliate them for their failure to spread Islam.

I hope all of al-Nabullshit’s children are gay and end up leaving Islam to live happy, independent lives. It would serve the douchebag right.

One comment on “Your Daily Muslim: Muhammad Rateb al-Nabulsi”