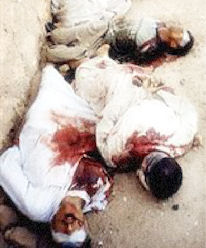 No image of Abu Hamizi was available, so here are some of the victims of his militia.

Muslims are good at making things explode. Unlike most Muslims who like to blow up cars or their own bodies, Abu Hamizi likes to make his victims’ intestines explode – from within. The 26-year-old is an Iraqi militant who spends hours a day on gay hookup sites not because he’s desperate and tired of jerking off, but to lure his victims to cruel, agonizing deaths.

Obviously, anyone who spends as much time as Hamizi does on gay hookup sites really wants some pole in their hole. However, Hamizi remains committed to his barbaric mission: “It is the easiest way to find those people who are destroying Islam and who want to dirty the reputation we took centuries to build up.” Well, Hamizi is sure doing a good job of maintaining Islam’s reputation of being barbaric and homophobic. Once Hamizi has set up an account on a hookup site, he begins messaging other users. When a user responds and the two arrange to meet, that’s where Hamizi’s buddies jump in.

Does the group then have an orgy? Well, that’s unknown since Hamizi didn’t comment on that, but normally the process was that Hamizi would select a location to meet, then have his posse jump the victim there. The victim would be taken inside and the men would beat him. “Animals deserve more pity than the dirty people who practice such sexual depraved acts,” Hamizi stated. “We make sure they know why they are being held and give them the chance to ask God’s forgiveness before they are killed.” The method of murder is the post horrifying part of this sociopathic madness.

Hamizi and his friends stripped their victims, then further bludgeoned them. When a victim did not put up any more resistance, one member of the group would apply superglue inside the victim’s anus, sealing it shut. The group would then hold the victim captive for hours and force them to drink laxatives. As the victim’s body prepared to defecate, it would not be able to contain the feces, causing intestinal ruptures and a painful death by diarrhea. Victims’ genitals and other limbs are also often chopped off as part of the torture.

The murderers also threaten and intimidate victims’ families and associates, since they are seen as guilty by association. They are told that their dead loved ones have been made “pure,” and are given the locations of the corpses. For gays living in Iraq, the future is grim, as dozens, if not hundreds, are murdered every year by Islamic militias like Hamizi’s gang.