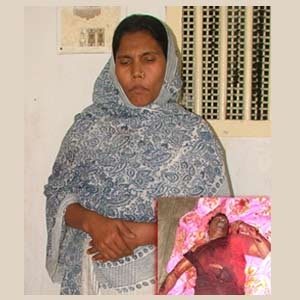 Chad Sultana and her husband’s corpse

It’s no secret that wives are often abused by their Islamic husbands; Qur’an 4:34 allows husbands to beat their wives if they feel their wives are disloyal or disobedient. Chad Sultana is a Bangladeshi Muslim wife with a man’s name who fought back… to an extreme.

After years of beatings at the hands of her husband Mohammed Nazrul Islam, Chad Sultana decided it was time to stand up for herself. Though she couldn’t put him through the hours of pain he forced her to endure, she decided she could do better. Her husband had taken three wives and wanted to take a fourth, the maximum number allowed under Islamic sharia law. Sultana married Islam at the age of 14 or 15, and the couple had a daughter together. Islam had children with his other wives as well.

Sultana, in a last-ditch attempt to preserve her marriage, told her husband that he needed to spend more time with his family instead of trying to find more teenage girls to bone. Normally one would think jealousy could be a motive, but does a dude really need a fourth wife when he has children to raise? Islam responded by beating her and telling her she had no right to criticize him. Realizing words and kindness would fail as they often do with Muslims, Sultana went into the kitchen and grabbed a knife.

Within an hour, Islam was lying on the floor, covered in blood. Sultana had ambushed him, stabbed him several times, then began to carry out the grisly punishment she had in mind for her abuser. While Islam was still conscious, she used the knife to saw off his genitals, which she viewed as the reason he kept seeking new wives. A few more stab wounds to the chest did him in.

Sultana has been charged with murder. Some have argued her actions were justified – do you think so? Comment below!