Posted by Your Daily Muslim on April 19, 2013 in Men, Russia, Terrorists, United States 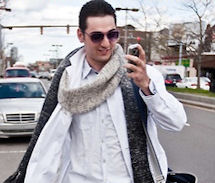 As if the media hadn’t already been covering these Muslims enough, here’s another story about them. Tamerlan and Dzhokhar Tsarnaev are brothers originally from predominantly-Islamic Chechnya in southern Russia. They came to the US five years ago and, much to liberals’ dismay, showed how completely unwilling Muslims are to integrate into western society.

In the five years they’ve been here, the brothers hatched and executed a plot to bomb the Boston Marathon on April 15, 2013. Three were killed in the blasts. Tamerlan spent his free time boxing (what is it with Muslims and having anger issues?) and Dzhokhar spent his free time online. Before waging jihad, Tamerlan was interviewed by a local photojournalist about his life and values.

“There are no values anymore… people can’t control themselves,” Tamerlan said, when discussing modern popular culture. “God said no alcohol.” It’s quite possible that Tamerlan said that when he found out everyone in the west could drink him under the table, which was an embarrassing moment. And Tamerlan really has no right to criticize anyone’s “values” – we aren’t the ones blowing people up because our imaginary friends tell us to. In the same interview, he said he didn’t like to take his shirt off during his boxing training because it could lead others to temptation. With a butterface like his, no one’s gonna want to tap that anyway, so shirt on or off is irrelevant.

“I don’t have a single American friend,” Tamerlan continued. “I don’t understand them.” His lack of comprehension of our culture is understandable – to a seventh-century savage hell-bent on destroying the infidel, western culture is far too advanced to be understood. However, even after having spent five years here, he didn’t even think that maybe his values were the ones that needed to be examined and changed so he could integrate into the larger society.

So now here we are today. Tamerlan’s splattered remains are in a morgue somewhere and his brother is on the run after discharging explosives at police. Authorities have warned that Dzhokhar is armed and dangerous.