Posted by Your Daily Muslim on April 25, 2013 in Anti-Christian, Men, Nigeria, Terror-Related, Terrorists 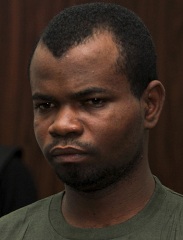 A face not even a mother could love.

Nigerian Muslim Kabiru Sokoto is a midget whose face looks like it received plastic surgery at the hands of a trash compactor. Fraught with self-doubt and low self-esteem due to his hideous visage, he felt an increasing need to prove himself to society and large and to his invisible best friend, a psychopath named Allah. Sokoto is a member of Boko Haram, Nigeria’s leading group for sadistic Islamic assholes who want to take the entire world back to the 7th century. He hatched a plan to target Christians on one of their most sacred holidays: Christmas.

Sokoto walked around the St. Theresa Catholic Church in the city of Madalla to scout the location. He decided it was a suitable target, so he and his Boko Haram buddies prepared some explosives. One of the militants placed the device in the church, then detonated it during a Christmas mass, killing 37.

Shortly after the blast, the idiot was captured. With the help of a fellow Boko Haram member, he escaped from holding, where he undoubtedly would have been made into the prison bitch. Fortunately, however, Nigerian authorities tracked him down a month later and threw him into a more secure cell. He has been charged with the bombing and is awaiting sentencing.