Posted by Your Daily Muslim on May 10, 2013 in Anti-Semitism, Israel & Palestine, Men, Misc Islam-Related Homicide 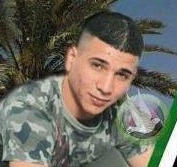 Looks like that could be a scar down the top of his head… from a lobotomy, perhaps?

Like all other areas where Islam is prevalent, the region of Israel many Muslims and liberals refer to as Palestine is a breeding ground for violence. Salami al-Zaghal is yet another piece of shit excreted from that region.

That was the text al-Zaghal sent to his brother minutes before stabbing an Israeli man who was standing around, minding his own business. The Qur’an commands Muslims to wage war against Jews, and contains numerous passages of vitriolic anti-Semitism. al-Zaghal was simply doing his duty to his religion, a stance backed up by his father: “It was destiny, and we take pride in him as a family. What he did is a duty for all Palestinians living with the aggression of the [Israeli] army and settlers.”

al-Zaghal had been held in an Israeli prison for four years on unknown charges, though considering his behavior, it’s kinda obvious to tell he was guilty of whatever he was accused of. He was arrested for the stabbing and shot during the arrest. He is expected to spend the rest of his life in an Israeli prison, and hopefully they find something to convict his mad father of as well. Seems like savagery runs in the family in “Palestine.”