Posted by Your Daily Muslim on June 2, 2013 in Foamers, South Africa, Women 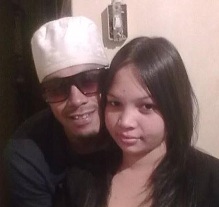 Shafieka Hendricks and her boyfriend Naeem

Shafieka “Hambeast” Hendricks is a Muslim from South Africa who never intellectually progressed past the second grade. When she stumbled upon Allah Sucks on Facebook, Hendricks proceeded to flip shit and do what a high percentage of Muslims do: issue death threats.

Yep, religion of peace right there. It totally doesn’t call for death to the unbelievers anywhere in its holy texts. Hendricks’ rage also involved claiming that Allah would punish the admins of Allah Sucks she was arguing with (myself not included, as I wasn’t online at that hour.) 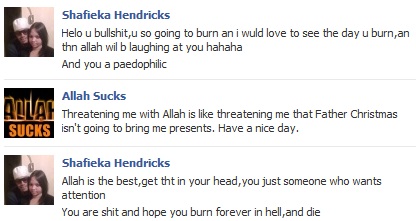 Hendricks also has a son, possibly conceived out of wedlock. Considering that she and her boyfriend are fairly devout Muslims, it is surprising that the couple didn’t kill the baby to preserve their “honor.” The boy is likely to flunk out of special ed, considering who his parents are.