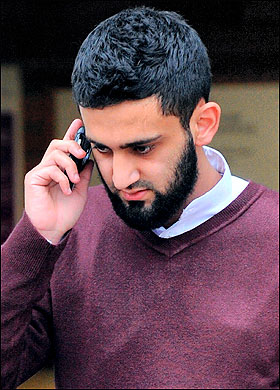 Artists have always faced death threats for drawing Muhammad (pigs be upon him), so Islamic art is generally not very interesting. This, however, isn’t the case with the work of UK Muslim Tohseef Shah – his art is wildly controversial. So controversial, in fact, that it landed him in court for causing criminal damage to a war memorial with graffiti. Here’s Shah’s magnum opus:

It reads “Islam will dominate the world, Osama is on his way” and further down, “Kill Gordon Brown”

The majority of individuals in the UK’s legal system are dhimmis, or people who are culturally submissive to Islam. Because of this, rapists like Adil Rashid get away with their crimes due to “cultural differences” or some other such bullshit. Shah’s trial was no exception; the prosecution found a loophole in the law that rendered his act of vandalism outside the realm of crimes inspired by religious bigotry. He was fined £50 and ordered to pay £500 in court costs.

In contrast to Shah’s light sentence, two non-Muslim men were sentenced to a year in prison for spray-painting a poppy on a mosque. This is why all dhimmi judges NEED to be thrown off the bench, by vote or otherwise. Justice will not prevail if people are too scared of backlash to fight for it.