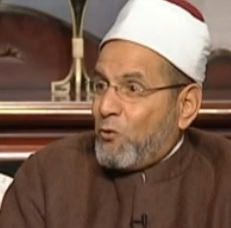 “The religious scholars have said that [homosexuality] is uglier than adultery, because such a man does not consider himself to be a man. He says: ‘I was not created to be a man.’ Why does he do this?”

Egyptian Islamic cleric Farahat Said al-Munji, who is affiliated with al-Azhar University, the world’s leading authority on Islamic jurisprudence, has clearly never met a gay person in his life if he honestly thinks that. Most gay dudes consider themselves to be dudes, and are glad they are. al-Munji probably got his idiotic ideas about gay men from watching RuPaul’s Drag Race or any of the plethora of second-rate reality shows on Bravo.

“This act [gay sex] is not done even by beasts – not by the donkey, the dog, or the buffalo. Never have we seen a buffalo jumping on another buffalo, or a goat jumping on another goat.” Based on that statement and his assertion of knowledge on the subject, I’m pretty sure al-Munji has a keen interest in watching goats get it on. “This is inconceivable. This act is more contemptible than the beasts, and more base than the donkey.” What’s so contemptible about two dudes boning? Like, seriously, what harm does it cause? None. The only possible reasons al-Munji hates gay sex are 1) because he’s a douchebag who bases his entire life around an obsolete work of fiction from the 7th century; or 2) he’s jealous that (other?) gays get laid way more often than he does.

“We have reached an even lower level. We have reached rock bottom. The prophet [Muhammad, pigs be upon him] said about [gays]: ‘Kill both the one on top and the one underneath.’ Do you know what Ali Abu Taleb said? ‘Kill them both and burn them.’ After they are killed, they should be burned.” al-Munji’s lack of knowledge about gay sex is almost as blatant as his lack of knowledge about LGBT people in general – for one, most gay guys don’t just lay on top of each other to have sex. His stance that gays should be killed comes straight out of the 7th century, from which Islam has never evolved. However, according to Barack Hussein Obama, “Islam has a proud tradition of tolerance.” Liberals, wake up. You cannot be both pro-LGBT and pro-Islam. Islam and LGBT rights are incompatible, as evidenced by those words of Muhammad (pigs be upon him) himself.