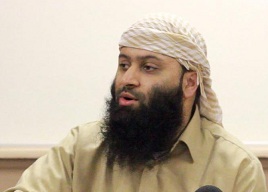 “May Allah destroy the enemies of Islam.”

Have you ever met someone who obsesses over one thing and spends their entire life on it? For example, the entire nation of South Korea and Starcraft. Well, UK Islamic preacher Abu Waleed is absolutely obsessed with being the ideal Muslim. However, this entails being a 7th-century troglodyte with no respect for women or other belief systems.

“The youth need a sheikh who is harsh with kufr [infidels] to wake them up.” Actually, the youth are already waking up, but not in the way Waleed intended – the English Defence League Facebook page’s fan base tripled in size in the past couple months. Waleed is also not a good role model for youth because he’s a lying welfare scammer, much like a very large percentage of Muslims in the UK. “Obviously when you have the incapacity benefit, you want to make sure you walk with a limp when you leave the house just in case there’s someone taking pictures.” Whoever is in charge of welfare in the UK really needs to get their shit together to stop funding these incorrigible fanatics – that quote was from a speech in 2008. As of right now, Waleed’s personal Facebook lists his employment as “I work hard to enter jannah [paradise].”

Waleed is a social media aficionado and posts a ton on Facebook. Being as obsessed with Islam as he is, there’s really no rational thought in any of his posts. “If you stick to our example and role model the prophet Muhammad [pigs be upon him] you cannot go wrong.” Muhammad’s example was that of a pedophile, a looter, and a warlord. That considered, a lot of Muslims’ behavior kinda makes more sense now.

“No matter how beautiful/handsome you are, you will still be the food of worms. So set aside your arrogance, and remember your grave.” That sounds like something an ugly person would say to try to make themselves feel better. I guess that explains why so many radical Muslims echo that sentiment of Waleed’s, since they don’t know how to groom at all. Muslimahs aren’t even allowed to pluck their eyebrows under sharia.

Speaking of Muslimahs and sharia, Waleed is a fan of the Islamic ninja costume. He stated: “My dear sister [Muslimah]. The more you cover yourself, the more beautiful you are.” Based on that, I’m guessing mummies really turn him on. Note that being “beautiful” has nothing to do with sexual attractiveness to Muslims; uncovered or poorly-covered women, regardless of their beauty, are viewed as a sexual temptation Muslim men must overcome.

In 2011, Waleed led a rally in which he gave one of the most disturbing speeches I’ve ever heard about Islamic conquest. “Today, my dear brothers, victory is for Islam. Victory is for the Muslims. Our prophet, our messenger, informed us that judgment day will not come until a group of Muslims rise in this nation, and they will go to the White House… The day will come when David Cameron and Barack Obama will be on their knees, giving us, the Muslims, the jizya [safety tax]. That’s right. Believe me, the day will come when even Queen Elizabeth will wear the niqab and the burqa.” Religion of peace… through world domination and subjugating everyone else. We need to rise against Islam and elect leaders who won’t budge when faced with the rising tide of Islamic extremism.