Some people don’t realize when they’re making an ass out of themselves, like Joe Biden whenever he opens his mouth. New York Muslim Bilal Mohammed is one of those people. Recently on Facebook, he joined a discussion of the Holocaust. It didn’t end well for him when he expressed his views. Here’s the screenshot: 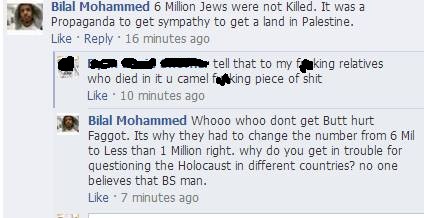 After that post, Mohammed got noticed by Malek Asad and Amir Hossein Raisolsadat, who recently put a large bounty on my head. Mohammed was invited to join their Facebook group, which mainly consists of sock (fake) accounts of Asad’s, like “Hannah Adel.” Notorious counterjihad-page troll Master Samer is a member as well.