Posted by Your Daily Muslim on July 11, 2013 in Activists, Dietary Absurdity, Indonesia, Men 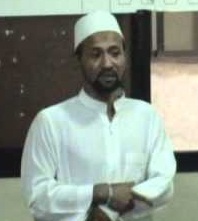 Indonesian Muslim Habib Idrus Algadri is the leader of a chapter of the Islamic Defenders Front, a radical Islamist organization best known for thwarting some “Bad Romance.” Aside from hating concerts, Algadri also hates other pastimes like drinking and paying people to take off their clothes.

In 2013, Algadri led numerous marches against places where he claimed prostitution was occurring. He and hundreds of his Islamic Defenders Front BFFs paraded down the streets of Indonesia, chanting and waving signs. He even accused the local mayor’s office of being a place of iniquity. Of course, everyone in the area who wasn’t a crazy Muslim was more than slightly peeved by the raucous movement.

Now that Bombadon- err, Ramadan 2013 has started, Algadri has yet another crusade: shutting down bars and strip clubs. He probably hates strip clubs because he can’t get it up, and his hatred of bars likely stems from a bad experience or two with drinking. His anti-alcohol crusade is in full swing – Islamic Defenders Front members are ransacking shops and taking alcohol from the owners only to throw it away. What a waste… much like Algadri’s entire life, devoted to a book of fiction.

Algadri and his associates have also stated that their little club will send a few people out to various clubs to ensure that no sinful activities are taking place, and have threatened vandalism and violence if they discover anything haram (forbidden) occurring. “We will take firm action against the circulation of alcohol, naked dancing and prostitution.” The dude sounds like he needs a drink or five to chill the f out. Hopefully those crazy Muslims that are deployed to clubs realize that drinking and dancing are harmless fun, and choose to partake instead of being giant buzzkills.

One comment on “Your Daily Muslim: Habib Idrus Algadri”