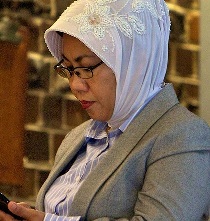 Nita Iskandar doing what she does best – pretending to be oblivious

Indonesian Muslim Nita Iskandar was one desperate housewife. She had been married to her husband Hazairin for decades, and had moved to New South Wales, Australia with him. Together, they raised a son named Andrew. However, Iskandar needed more. She met a man, Mohammed Shah Saemin, while working at the Malaysian consulate in Sydney, and the two began to have a casual affair. Much like the majority of her body, Iskandar wanted to keep the affair under wraps, but was unable to do so. That’s when things got bloody.

Gossip began to spread about the covert couple in Sydney’s Indonesian community. Word reached Hazairin and Andrew, and the two plotted revenge on the man they believed was responsible for causing the affair to happen. Really, Hazairin was responsible, likely due to age-related erectile dysfunction or otherwise neglecting his wife, let’s be honest here. Hazairin and Andrew followed Saemin to his apartment one day and stabbed him to death outside his doorstep. He was on the phone with Iskandar at the time he was attacked, and screamed, “Help me! Help me!” However, Iskandar only yelled back into the phone and did not summon emergency services to her lover’s aid. Note to readers: don’t be the “other man/woman.” It doesn’t work.

Now here’s where Iskandar gets involved. Instead of mourning the loss of the man who actually cared about her, instead she helped Andrew flee the country to avoid punishment for his crime. She even played oblivious to her loved ones’ connection to the case, claiming she didn’t know if her family was involved. Hmm, let’s see, who else would want to stab the dude to death if robbery wasn’t a motive? Seems like Iskandar is trying to cover her ass here by not selling out her family… Andrew asked for Iskandar’s blessing to travel to Singapore, and she agreed since she claimed it would help relieve his stress. He had not told her of his involvement in the slaying, but considering how the crime was the talk of the town and how often Muslims commit honor killings, it should have been obvious. Iskandar helped him prepare for his “trip.”

Both Andrew and Hazairin were arrested for the homicide, and Iskandar was arrested as an accessory. All three were found guilty. Andrew said his mother had expressed sadness to him over her lover’s death, but other than that, she continued to act dumber than the average blonde, hoping it would get her off the hook for helping her son flee from justice.