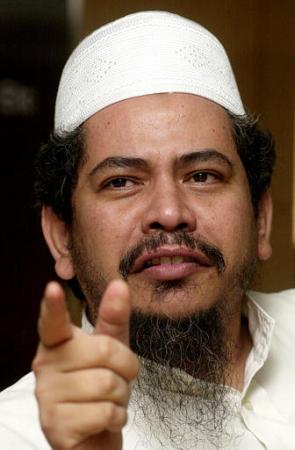 You know you’ve hit rock bottom when the best thing you can think to do with your life is start a jihadi organization. Indonesian Muslim Jafar Umar Thalib’s life had reached such a low point after a tumultuous trans-national college career that he ended up waging jihad in Afghanistan. A few years later, he returned to Indonesia and founded Laskar Jihad, which is exactly what it sounds like.

In 1999, Thalib founded the Forum Komunikasi Ahlussunnah Wal Jama’ah, a group which was meant to push for political reform. Specifically, its purpose was to denounce the campaign of a female presidential candidate, because sharia law strictly forbids women from having any authority.

One of Laskar Jihad’s defining moments came in the year 2000, shortly after its formation, when its members filled a stadium and declared it to be the “year of jihad.” Many waved swords, and the rest did the trademark Muslim finger-point. All screamed like bleating sheep. Thalib’s goal with Laskar Jihad was, at that point, to force the government to guarantee special protections and rights for Muslims. Soon, we in the west will begin to see the same thing out of our resident Muslim enclaves.

After consulting with other Salafi Muslim leaders, Thalib’s jihad began. He claimed it was a “defensive” jihad to protect Muslims from violence by Christians… wait, am I reading this right? Muslims being attacked by Christians? Uhh, it’s probably the other way around, considering how Christianity more or less teaches non-violence and Islam tells its followers that killing infidels is a sacred duty.

Thalib has stated that one of his ongoing goals for Laskar Jihad was to “Islamize” Indonesian government policies, and to guide legislation toward being aligned with sharia. However, that all came to an end when Laskar Jihad was implicated by numerous media outlets in the 2002 Bali bombings. Within days, Thalib had dissolved the organization, and by doing so, had saved himself from a long jail sentence. He claimed he broke the group apart because its members were engaging in non-sharia-compliant political meddling, but it likely had to do with government pressure. Thalib continued to rage at the fact that the female candidate became president, and has since languished in mediocrity and irrelevance much akin to Lady Gaga since mid-2011.