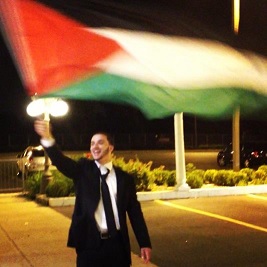 Liberals often try to argue that Muslims who live in the west make an effort to culturally integrate, but that couldn’t be farther from the truth. 20-year-old Virginia Muslim and former Australia resident C*ntasir Sarsour is living proof of that. His religion greatly inhibits his ability to engage in normal social interactions – he judges women whom he considers to be dressed immodestly.

“You can’t get away from immodest girls unless you live in a cave. That’s not going to happen. But you just try your best to lower your gaze and keep on moving.” So he avoids girls who show skin… uhh, dude, it’s summer, everyone’s wearing more revealing clothing right now. His hesitance to interact with western women may be because he suspects he wouldn’t be able to restrain himself around them, a belief held by many Muslim men.

Sarsour, an avid pro-Palestine activist, also believes that the al-Aqsa mosque is under “crusade” occupation based on a status he shared on Facebook. Here’s one thing about the al-Aqsa mosque – it’s in Jerusalem. In other words, he’s saying that Jerusalem should be Islamic.