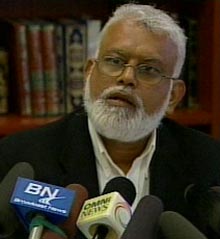 Indian-born Canadian sheikh Ahmad Kutty can’t keep his crazy opinions to himself. Cited by many in the media as a moderate when he’s actually anything but, Kutty has issued rulings (fatwas) on everything you can imagine. His website reads like a bad version of answers.com – however, he’s the only one giving (long-winded) answers to the absurd questions he receives.

On gays: “No one is a born homosexual in the sense that God has created him or her that way; it is a choice they have made. It is not different from saying: why some people are born as killers and rapists or murderers.” Wait, did he really just compare being gay to being a murderer?! Seriously?! Homosexuality is a natural sexual orientation seen in dozens of species. However, instead of basing his opinions on observation, Kutty bases them on a 7th-century book of child porn and warfare. “If [a homosexual] is a Muslim, he is left with no choice but to change.” I guess telling gays to become straight is a bit better than hanging them, but seriously, what a heap of homophobic crap.

Kutty stated that children must fast for Ramadan all day beginning at age ten. If a western parent were to deprive their child of food for most of the day, they’d be jailed for child abuse. However, Muslims get away with it because cultural influences say we can’t question or interfere with their religious beliefs.

When a suicidal closet-case contacted Kutty asking for help, Kutty’s response was for the person to chant Allahu Akbar and a bit of other nonsense 33 times each morning and evening before engaging in other ridiculous rituals that do nothing to help one’s mental health. Note to LGBT readers who are suicidal: call the Trevor Project, don’t listen to some old dude with a creepy beard who tells you to bend over for Allah – if you’re gonna bend over, at least have some standards in terms of who you do it for.

Kutty’s also a sexist douchebag: “Because women by nature love to appear attractive in public in order to be looked at and adored, Allah trains them in resisting the evil tendencies inherent in their own carnal souls, by commanding them to wear modestly and appropriately.” Basically he just accused all women of being attention whores… wow. Dick move. Any religion that forces women to dress and behave a certain way so as to avoid tempting men is clearly a bunch of patriarchal, sexist bullshit. Anyone who doesn’t recognize this is a deluded idiot. “A woman can [cut her hair for beauty] provided she avoids a hairstyle peculiar to men. The prophet [Muhammad], [pigs] be on him, has cursed men who copy women and women who copy men.”

Based on Kutty’s site, I’m pretty sure Muslims could totally outdo the freaks on The Maury Show with their kinks, polygamous/child marriage drama, and utter inability to function without religious guidance. Check this link and go through them. Laughs for days.