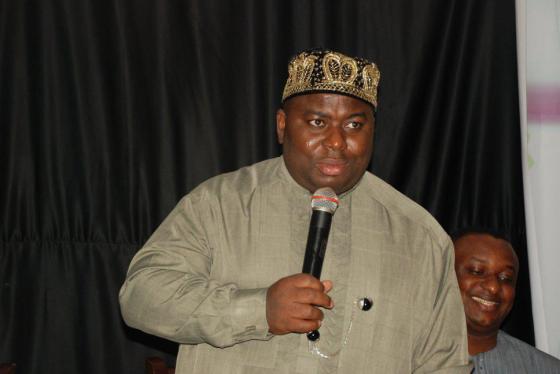 Asari posted this status on his Facebook regarding recent controversy in Nigeria over child marriage: “People should learn to respect other people’s sensibilities…We Muslims have the right to marry when we want or give out our daughters at any age we want.It is not your business and the law must respect our right to do so.Anything short of that is an infringement on our rights.We did not ask you to marry ladies of that age or give your daughters out in marriage at that age.Plzzzzzzzz respect our sensibilities.” I’ll respect your sensibilities when you respect the rights of young girls to not be forced into marriage and raped… in other words, f*ck your sensibilities. Marrying a child is not your right, it is an abuse, as is giving out a child in marriage. Anyone who thinks such practices are acceptable or civilized is a monster.

Asari is currently living in exile in Benin. At a recent conference, he started spouting insane conspiracy theories about governmental manipulation of ethnic groups and that he does not view himself as Nigerian. He claims that the government has been “looting” the region’s oil away from the people, and says that the government doe not want peace. He says that, until various ethnic groups can come together and collectively agree to be Nigerians, that no such nation of Nigeria exists.

“I take very strong exception by being referred to as a militant. I am not a militant and I don’t know the meaning of that word militant and I don’t want to know…” Hmm, let’s see, you led an armed group responsible for violent attacks on oil wells and pipelines. I’m pretty sure that makes you a militant. And claiming not to know the definition of the word only makes you look either a) unintelligent; or b) a liar. I’m pretty sure both of those fit Asari much better than even XXXL clothing.