Posted by Your Daily Muslim on August 11, 2013 in Men, Nigeria, Terror-Related 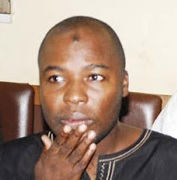 Bewildered – just like you’ll be after trying to figure this one out!

Nigerian Muslim Ali Sanda Umar Konduga is known to have mental difficulties (aside from the whole imaginary friend named Allah thing), and he’s gotten himself into quite a bit of trouble. Konduga (not to be confused with condom), joined Islamist group Boko Haram, a group responsible for bombings and shootings of non-sharia-compliant targets. However, was that truly where his heart was?

Konduga issued numerous press releases for the group under the alias Usman al-Zawahiri. Most of these announcements had to do with the faith-based humanitarian work of Boko Haram, including burning schools down while there were still children inside and attacking churches to show Islam’s interfaith tolerance. However, he was expelled from the group in 2011 after allegedly being “outed” as a spy for the Nigerian government.

Considering his fragile mental state, Konduga was probably easily manipulated into turning on his Boko Haram bros. When they found out he had betrayed them, they took pity on him for an unknown reason… or perhaps it was part of a greater plan all along.

Konduga was arrested later in the year after being exposed as a spy. He had been living under the protection of state personnel, but it was discovered that he had been in contact with a Boko Haram member who had infiltrated the Nigerian government, senator Mohammed Ali Ndume. Perhaps lingering loyalty to Boko Haram was the reason Konduga did not reveal the (not gay) relationship. Maybe Boko Haram expelled him so the government would feel obligated to protect him as a “valued asset”, and he might gain connections with government personnel or gain insight into security operations that way; who knows. Konduga confessed to his connection with Ndume and to a charge of criminal intimidation, and will serve three years behind bars.

Since his arrest, Konduga has offered to help the government investigate Ndume and other officials possibly connected to Boko Haram.