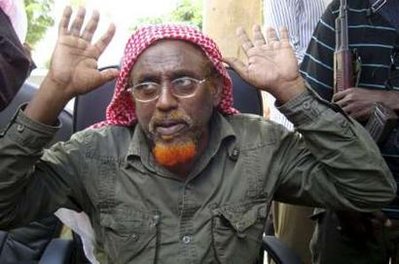 Somali clown/cleric Hassan Dahir Aweys is a pretty terrible person, hideously-dyed beard and all. He was a member of the Islamic Courts Union of Somalia, a group that sought to push sharia upon the hellhole nation. The cleric, now in his late 70s, was viewed as one of the more radical members of the Union, and his views were unfortunately taken as credible and legitimate.

In the 1990s, Aweys lead al-Itihaad al-Islamiyya, a jihadist group. The group performed typical acts of Islamic community service, including firebombing hotels and shooting up markets. The group received some funding from al Qaeda. In 1991, when the Somali government invariably collapsed (Somalia is about as stable as a bipolar four-year-old after consuming a giant heap of Skittles), al-Itihaad al-Islamiyya captured large portions of the nation. Ethiopian intervention forced them to retreat and withdraw in 1996, when a truce was signed. After 9/11, the UN designated him as a terrorist.

“We will fight fiercely to the death any intervention force that arrives in Somalia,” Aweys stated when interviewed in 2005. Hmm, still butthurt about getting wrecked by Ethiopia, I see. Aweys warned that there would be “jihad” against any and all peacekeepers or foreign troops that entered Somalia. In 2006, Ethiopia invaded again, trying to settle the rampaging jjihadi militants and bring stability to the region. After numerous clashes, Aweys fled, realizing his wake of destruction would grow greater still.

The decrepit, aging Aweys resurfaced in Eritrea in 2007, trying to start yet another Islamic militant rebellion. After that more or less fell apart, he returned to his native Somalia, where a new jihadi coalition group called Hizb al-Islam was being formed. Seeing that the group’s members craved bloodshed as much as himself, he joined and quickly rose through the ranks to become the group’s leader. In 2009, he declared war on African peacekeeping forces in the region. Uhh, why is the religion of peace declaring war on peacekeepers? Something doesn’t add up…

In 2010, Hizbul Islam was forced to merge with Islamist militant group al-Shabaab, after clashes between the two groups. You’d think that followers of the religion of peace wouldn’t spend all their time trying to kill one another, but apparently there’s peace in shooting people with AK’s. Aweys was accepted by the psychos of al-Shabaab and is now viewed as their spiritual leader. He was arrested in June 2013, beaten, and tortured. He is currently behind bars for inciting violence and promoting extremism. The Somali government plans to release him soon, as long as he agrees to stay out of politics and warfare.

Interviewed recently, Aweys stated of al-Shabaab: “We don’t have any links to al Qaeda. Why don’t they [the Somali government] give us a chance?” Maybe it has something to do with the mass shootings and the crazy roving bands of Muslims waving AK’s screaming “Allahu Akbar!”