Posted by Your Daily Muslim on September 5, 2013 in Algeria, Anti-Semitism, France, Men, Terror-Related 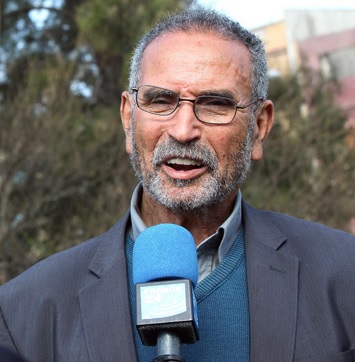 Perpetual victims, Muslims often try to extort governments through a strange combination of grievance-mongering, law-bending, and trying to make liberals feel sorry for them. All too often, it works. Meet Mohamed Benalel Merah, an Algerian Muslim whose son (also named Mohamed) committed one of the worst atrocities in France in recent history. The younger Mohamed shot up a Jewish school and killed three schoolchildren, a rabbi, and three military personnel. He was killed by police after a 32-hour standoff. Now, his father is suing the nation of France for killing his son – who was armed, dangerous, and on a killing spree.

The younger Mohamed filmed much of his rampage, and was often seen smiling and laughing after killing people in the footage. The 23-year-old was waging jihad, his mind so warped by religion that unfathomable violence became a sacred duty. Considering how Merah’s children, Mohamed and his sister Souad, turned out, it’s quite likely their father had something to do with their crazed fanaticism.

The audacity of Merah’s lawsuit may be shocking, but consider this – he’s a Muslim. The principle of Muslim exceptionalism found in Islam teaches that Muslims are of a higher status than non-Muslims. Thus, Merah feels that the police did not have the right to terminate his son’s miserable existence. French officials immediately denounced Merah’s lawsuit, but he responded by saying he “would not shut up” until he felt he had gotten justice for his son. And by justice, he means a fat lump of money since he’s a greedy bastard without a moral compass.

During an interview, Merah stated: “Why did they kill him? He could have been sentenced to many years in prison or even a life sentence. There is no death penalty in France.” Well, that kinda goes out the window when you’re shooting kids and soldiers, and you’re all hyped up on jihad and not thinking clearly. Merah then stated he would “hire the biggest-named lawyers and work for the rest of [his] life to pay their costs.” He blamed France for having killed his son, but did not even think for a second that his barbaric son totally deserved it and brought it upon himself. Yet again, we see how Muslims attempt to portray one another as completely innocent victims who must be treated as such, exempt from the same laws and justice that apply to the rest of society.