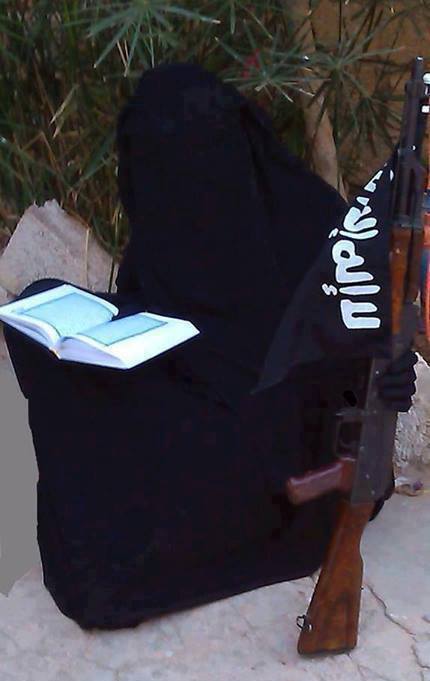 Some people don’t realize that everyone was on their side all along until it’s too late. Nusaybah “Nuisance” bint Kaab, also known as Nusaybah al-Sooriya, was a normal American woman living an ordinary life as a Christian. After 9/11, Kaab’s interest in Islam grew, and she turned to none other than sheikh Osama bin Laden to learn more about the religion. Enthralled by its teachings of child marriage, wife-beating, and war against infidels, Kaab converted to Islam. To this day, she claims she is “strongly influenced by the words of sheikh Osama bin Laden” and openly supports the worldwide implementation of sharia law.

Upon her conversion, her friends and family realized the bitch had lost it, and promptly unfriended her on Facebook and ignored her in person, since she had started to walk around wearing black drapery. Upset, Kaab turned to Allah for guidance. The voices in her head told her to travel to the middle east, where she wouldn’t be looked at as being crazy because most of the people over there suffer from a similar psychosis. She claims to feel “betrayed” by those who were close to her, but who betrayed who – the one who kicked the jihadist out of their life, or the one who basically declared war on her own country by means of her allegiance?

Kaab traveled to Gaza, where she worked as a nurse. After realizing that Gaza is kind of a dump, she went to Jordan, then Yemen, making more jihadi connections along the way. I have no idea where she got all the money for these trips – these terrorist types always seem to have bottomless pockets. I don’t get it. Kaab made sure to stay away from the non-“Palestine” area of Israel, since she hates Israel, along with the US, Egypt, and Saudi Arabia. She claims those countries are being run by “kuffar” [infidels] or “munafiqeen” [hypocrites].

Currently, Kaab is in Syria, waging jihad with al Qaeda-linked rebels against the regime of Bashar al-Assad. When she isn’t waving a gun, dressing up like a ringwraith, or screaming “Allahu Akbar,” she’s on Facebook, harassing counterjihad pages and spamming jihadist propaganda. She claims western media is “kuffar news” and tells her Facebook followers not to trust it. Sure, everyone knows MSNBC is a bunch of leftist propaganda, but many other western media outlets still report some facts mixed in with all the sensationalism and opinion.

On the overthrow of the Muslim brotherhood regime in Egypt, Kaab whined: “I’m told a ‘Pro-Democracy’ march/protest is going on right now in Nasr City. When are our brothers and sisters going to do a ‘Pro-Shariah’ march/protest. My brothers and sisters in Egypt, you need to wake up. Allah showed you already that Democracy doesn’t work. He’s told you in the Quran and still you insist?” Actually, democracy does work – just look at the failure of the Muslim brotherhood in Egypt before criticizing democracy. Now tell me sharia-based laws are as good as democracy. Kaab has also praised the killing of Egyptian security forces, whom she claims are in rebellion against Allah.

Kaab also praised the September 12 suicide bombing of a US-NATO base in Herat province, Afghanistan. She called the bombing a “martyrdom operation” against the “Taghout” [rebels against Allah]. How a typical American woman turns into a crazed Muslim maniac is beyond me. Why would anyone choose an imaginary sky-friend over a stable life with a good social circle?

Some of Kaab’s favorite Qur’an verses are among the most tolerant in the entire book, such as Qur. 4:138-140: “Give tidings to the hypocrites that there is for them a painful punishment – Those who take disbelievers as allies instead of the believers… Allah will gather the hypocrites and disbelievers in Hell all together.” Yet again, we see the true stance of Islam toward non-Muslims. There are all sorts of similar passages in the Qur’an and Hadith, and any Muslim who claims to believe in those hate books sure as hell believes in those vile passages. The books are the motivation behind the bloodshed. Don’t let any deluded liberal tell you otherwise.