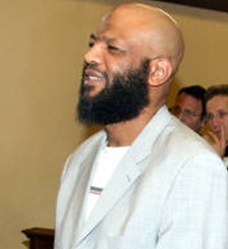 Trabelsi, a former pro soccer player in Germany whose opponents could distract him by pointing and shouting, “naked little girls!”, had met with terrorist sheikh Osama bin Laden in the months before 9/11. The two discussed jihad, and after plotting an attack on a US embassy in Paris, agreed on a target for Trabelsi’s virgin-grab: a US military installation in Europe. The plot was to be carried out within a week of 9/11, and Trabelsi was excited to meet his 72 pieces of ass. However, shortly before he was able to disperse his innards, he was arrested in Belgium. Reports state he had acquired money from al Qaeda personnel in Pakistan, and was working to create a giant bomb in his apartment. He was sentenced on terror-related charges and held behind bars there for 12 years.

I’m guessing that interrogating Trabelsi was incredibly easy – he’s so gullible, all the authorities would have to do is tell him he’d be released if he told them everything. Now, he’s being shipped off the US to face more terror charges since he was planning to attack a US installation. Despite its lack of success for him, Trabelsi is still falling for the age-old Islamic lie that banging your head on the ground five times a day will bring you great reward. I doubt he will ever realize that he’s just injuring himself; his brain is likely already far too damaged for such an epiphany to occur.