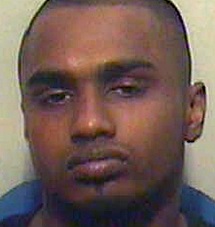 His eyes make him look like he has the IQ of a brain-damaged goat. Oh wait, he does.

“Men are in charge of women by [right of] what Allah has given one over the other and what they spend [for maintenance] from their wealth. So righteous women are devoutly obedient, guarding in [the husband’s] absence what Allah would have them guard. But those [wives] from whom you fear arrogance – [first] advise them; [then if they persist], forsake them in bed; and [finally], strike them. But if they obey you [once more], seek no means against them. Indeed, Allah is ever exalted and grand.” -Qur. 4:34

UK-residing Muslim Jubel Miah’s wife just wanted to go to college. Of course, that didn’t go over well – leading Islamic scholars have spoken out against women’s education, claiming it can be detrimental to family structure. Miah, 21, was afraid of his marriage falling apart right after it began, so he did as millions of other Islamic husbands around the world do: beat his wife and forced her to wear the niqab. The niqab is the ridiculous ninja costume many Muslimahs wear because they know they’ll get beaten if they don’t. Some crossdressers also wear it to sneak suicide bombs through security checkpoints.

“You are a married woman,” Miah told his wife. “You don’t do this.” Uhh, it’s the UK, she can do what she wants. Miah is only paranoid about his wife going to college because he’s insecure and gets jealous easily. The Hadith commands men to be like this; “[A dayyooth is] one who lacks ghayrah [protective jealousy]; one who does not care if [unrelated] men approach his wife, mother, sister or daughter. A dayyooth is prohibited from entering Paradise.” I’m sure this insecurity stems from Miah’s winning combination of an above-average waistline, a below-average dick, and a nearly non-existent cognitive capacity. Also, contrary to what many Muslim men think, marriage is not an owner-slave relationship.

When Miah’s wife went to a doctor after he impregnated her, numerous bruises and lacerations to her limbs, torso, and eyes were discovered. Miah had also damaged her tongue. Why’d he start beating her? Was she disobedient or arrogant like Qur. 4:34 describes? Not so much. All she did – or, more accurately, didn’t do – was smile during Eid celebrations. Gee, she’s married to a controlling, aggressive husband who’s preventing her from fulfilling her dreams because of a 7th-century book of fiction… I wonder why she isn’t smiling about a celebration of Islam’s invisible madman in the sky.

The baby was delivered prematurely. A male doctor helped deliver it, which sent Miah into a raging fit. He even threatened hospital personnel and bystanders during his frenzy. However, despite all this and the obvious evidence of abuse, no one tried to cage the savage Quranimal.

Thankfully, his wife managed to get away, but only after one last terrifying ordeal at her husband’s hands. Miah picked up a dumbbell and hit her with it. Frightened, she tried to run, but he picked up a pair of scissors and stabbed her. Realizing he didn’t want to kill her just yet because he’s sick and sadistic, Miah relented. She disappeared shortly thereafter, and told her story to authorities. Miah was jailed for a pathetic four months – a paltry excuse of a punishment for the long months of violence and (likely) rape his wife had to endure.