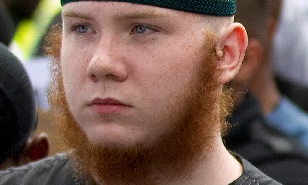 For someone who doesn’t eat pork, he sure is porky.

Last time we saw soulless (ginger) Muslim convert Jamaal Uddin, real name Jordan Horner, he had just been arrested for assaulting a photographer. Now, new details have emerged of the ginger’s misbehavior. Uddin, like many other Muslims, is generally angry and up to no good. Thus he was a natural fit for Muslim Patrol, a group of Islamic vigilantes who engaged in such jolly activities as slapping people’s alcoholic drinks out of their hands while walking down the street because they were in a “Muslim area.” The goal of Muslim Patrol was to enforce sharia on the streets of London, which meant ridiculing women for not covering themselves, insulting homosexuals, assaulting people, and threatening to stab them. But remember, Islam is the religion of peace that has a “proud tradition of tolerance,” as Barack Hussein Obama says.

Recently, Uddin admitted to having assaulted two men he and other Muslims confronted on the street for not obeying sharia law. The men were drinking publicly, and the rabid Quranimal couldn’t allow that. Instead of sticking to his old tactic of waddling around putting up “sharia-controlled zone” stickers condemning music, pornography, drinking, gambling, and gays (everything fun), Uddin decided that physically waging jihad against the men was the better way to go. “Why are you poisoning your body?” A Muslim Patroller, possibly Uddin, asked. “It is against Islam. This is Muslim Patrol. Kill the non-believers.” The Muslims then knocked the drinks out of the men’s hands. As the men began to flee when the Muslims started to make death threats, Uddin punched two of them. Whether posting stickers or throwing punches, Uddin always ends up getting arrested. I get the impression he likes being handcuffed… and his precious sharia dictates that he can’t interact with unrelated women, so, uhh… now that is some damn nasty #gayporn4muhammad.

The stickers Uddin posted were part of a campaign against “western decadence.” Now, the rhetoric has become even more extreme. Uddin has said that he hopes British soldiers will burn in hell (with Muhammad, pigs be upon him), and has also praised sheikh Osama bin Laden as his “hero.” Mark that square on your Angry Muslim Bingo board.

Uddin’s recent arrest for beating up a photographer should come as no surprise; Islam is violent and commands its followers to violently subjugate all non-Muslims. During the assault, he told the victim: “You should be careful,” before showing the true peace of Islam. “What happened to the boy soldier [Lee Rigby, beheaded by jihadists] could happen to you.” Uddin will be sentenced for various violent offenses next month. Hopefully he is force-fed bacon every meal behind bars.