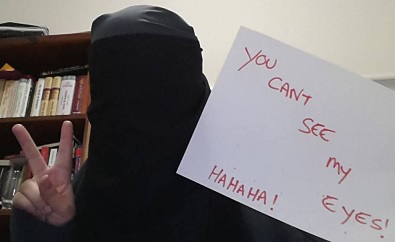 Normally she at least shows her eyes… lol

Australian Muslimah Cheri Bernice Joan Mays, who chose the Islamic name Ayisha after Muhammad’s child bride, started pretending it was Halloween every day and never looked back. The Muslimah now wears the niqab (ninja costume) on a daily basis to hide her presumably unsightly appearance, and frequently posts images and messages from both jihadis and anti-western clerics. Mays is a divorced mother of two, and is likely raising both of her offspring to value their religion over being able to integrate into society at large. Let’s see how far off the deep end this young Muslimah has gone.

Mays supports the following hate preachers: anti-Western, homophobic mufti Ismail Menk, violently homophobic sheikh Khalid Yasin, recently-arrested anti-Semite Yousef al-Khattab, and terror-enabling imam Abu Taubah, among plenty of others. Instead of being a “moderate” Muslim and pretending to care about the laws of the west, Mays is fairly open about her extremist leanings. Between postings of her crappy gothic lyrics reminiscent of Evanescence gone Islamic, Mays shares messages on all sorts of subjects Muslims love, including jihad in Syria and forbidding women from showing their faces on Facebook. Sorry, but I’m not gonna add a pair of eyes. Seeing that in my newsfeed would just be creepy.

Introducing YDM TV! Here’s a video from Mays’ Facebook, titled “How you eat and drink in niqab lol.” The use of the “lol” shows that Mays is aware of the absurdity and impracticality of the garment, but still chooses to wear it to please her imaginary friend despite its unwieldy nature. Of course, what she eats is halal – slaughtered according to Islamic standards of utmost cruelty.

Here are some screenshots from Mays’ Facebook. I think these say enough without me having to comment all over them.

She knows her costume is ridiculous, but still chooses to wear it. Can you say WEIRDO?

What’s so wrong with showing a little skin? Oh wait, never mind, no one wants to see.