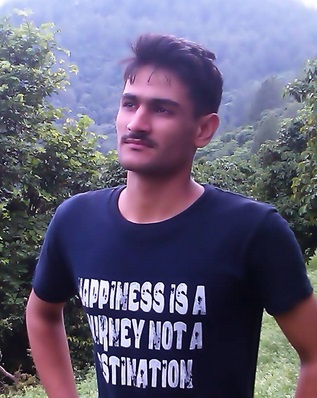 Happiness is a journey… and this angry Muslim is walking in the opposite direction.

Afghan Muslim Shayan Ahmed Khan, who now lives in Pakistan, is in dire need of a constructive outlet for his Islamic rage. Instead of spending his time doing anything useful for humanity, he instead posts pictures calling for “DEATH TO AMERICA” on Facebook. I mean, Muslims tend to be walking stereotypes, but this one kinda takes it to a whole new level. Since it’s Islamic RAGE week here at YDM, let’s dig into this Muslim’s deep-seated anger issues! Quotes have been corrected for spelling. 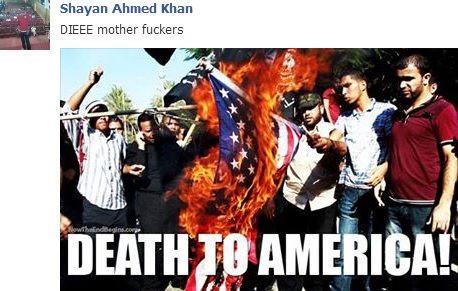 “Biggest terrorist is America, Israel,” Khan wrote on Facebook. “They are son of bitch, assholes, fuckwad. They will be going to hell insha’Allah. Islam is the best. ALLAHU AKBAR ALLAHU AKBAR.” Despite his generally poor grammatical cohesion, Khan knows the word “fuckwad” and how to use it. Clearly this Muslim has his linguistic priorities all sorted out. If Islam were really the best, wouldn’t there be no way to legitimately criticize it? Instead, from where I’m sitting, I’m more inclined to say that Islam is the worst thriving religion in the world today. Other religions’ followers don’t blow themselves up for their gods. Let’s not forget all the Qur’an and Hadith passages that call for violence against infidels (kuffar) and people who commit certain “transgressions” like having sex before marriage. If Islam is the best at anything, it’s the best at being savage.

“Eat like a pig, live like a pig, faggot assed fat American, shit faced shit eating shitters, long live shitland… go cougar ass country… fuckin cowards!!” Let’s see what we have here. A homophobic slur, lots of shit, and references to pigs. The choice insults used in the Qur’an, which are primarily directed at Jews, also make use of porcine imagery as Khan does. I wonder where he got the inspiration… oh wait, maybe one of the books every Muslim has read. “These Britains, America and Israel knows nothing but ‘FUCK,’ barking like dogs, that sees nothing, OINK-OINK like pigs that hasn’t been fed. WoOOhHH…!!! What a SHAME to you all America of IGNORANCE & ILLITERACY!!!” Uhh, dude, you’re from Afghanistan and you’re criticizing the US about its illiteracy rate?! Wow. Just… wow. Again, Khan used imagery of nejis (ritually unclean) animals (dogs and pigs) in his feeble attempt at an insult. I’m pretty sure the average third-grader could think of more creative jabs than Khan’s repetitive howling.

The crazed ranting doesn’t end there. “You ass-jabber… assholes fatasses…!! I hate you and fuck you all. I piss on your country!” Ass-jabber? Is that supposed to be some weird Islamic anti-gay slur? Whatever it is, it’s more incomprehensible than insulting. Khan really needs anger management classes – insulting people really isn’t his strong suit.