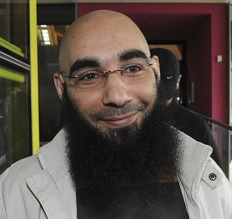 “This is a short message to the King of Belgium, the Belgian government, the Belgian people, and specifically to the Muslims in Belgium. This is the flag that, Allah willing, will soon be flying on top of that building over there. There you see the flag of the Taghout, of the infidels, and soon, the flag of ‘there is no god but Allah’ will be flying there, on top of that palace…”

Belgian jihadist sheikh Fouad Belkacem, aka Abu Imran, was born fourteen centuries too late. Belkacem is a member of Islamist group Sharia4Belgium, which is just like every other Sharia4 group in existence: batshit crazy. After calling for the destruction of monuments in Belgium, Belkacem received an invitation from French Islamists to join their protests against France’s ban of the niqab, and what kind of Muslim could refuse such a great opportunity to interact with ninjas? Belkacem and his group accepted the invitation and decided to add their unique brand of craziness.

Belkacem is an outspoken opponent of democracy, considering it a form of kufr (disbelief.) He also hates gays and believes they should be sentenced to death, as instructed by Muhammad (pigs be upon him) in Hadith. The Sharia4Belgium group has also condemned numerous anti-Islamist politicians and said they should “expect consequences.” Belkacem also stated in a video message: “We believe sharia will be implemented in Belgium and worldwide… Democracy is the opposite of Islam and sharia… This is a dirty, perverted community [Belgium].” Needless to say, France was not prepared for what would soon descend upon its streets when Sharia4Belgium members arrived.

Of course, traveling to France to promote the Islamic ninja costume wasn’t enough for Belkacem or his bearded BFFs. “We are coming to perform a dawah (evangelism.)” Now, evangelism is generally harmless, albeit annoying – only stupid people really fall for it. “Our dawah is directed toward Carla Bruni. We call upon Carla Bruni to become a Muslim, to repent, to join our Islamic community, and to wear the niqab. I ask Allah to guide Carla Bruni, to turn her into a niqab-wearing Muslim, and to make her divorce that unbeliever, [French ex-president] Sarkozy, may Allah fight him.” Yep, totally the religion of peace right there, asking its deity to “fight” an “unbeliever.” And why the hell would a confident, beautiful woman like Bruni ever want to dress like a ninja? The niqab is an instrument of shame, of stripping a woman’s power. It is not a garment any liberated, empowered woman would feel compelled to wear. The French allowed the crazy Muslims to protest, but a strong police presence prevented any violent jihad.

“We are coming to say: Oh Sarkozy, enemy of Allah, dog of the Romans, son of the unbeliever, we are on our way. We are on our way with ‘Allahu Akbar,’ ‘Allahu Akbar.’ We are coming, with our nuclear bombs of ‘Allahu Akbar.’ We are coming, with our black flags – the black flags of ‘There is no god but Allah, and Muhammad is the Messenger of Allah.’ We are coming to take back what belongs to us, to regain our land and purify it of unbelief and of the unbelievers. We are coming with ‘There is no god but Allah.’ We are coming because we reject democracy. We do not accept democracy. We accept nothing but the tawheed of Allah. We accept nothing but: ‘There is no god but Allah.’ We accept nothing but the sharia of Allah… By God, we are on our way. The day you will see the black flag [of jihad] flying over the Élysée us very near. I ask Allah to give us the power to plant the black flag over the Élysée.” Again, we see the true peacefulness of Islam on full display when Belkacem asks his imaginary friend to “purify” (read: massacre) the “unbelievers.” I know this crap sounds like it was taken from some really bad cult-related horror movie, but this is what a lot of Muslims actually believe. Somehow, the deluded left-wingers among us expect us to coexist with these barbarians who are dead-set on our destruction.

Aside from promoting the mass slaughter of kuffar (infidels), Belkacem has quite the criminal record. He has been arrested for incitement, burglary, possession of drugs, and most recently for recruiting jihadists to travel to Syria. Remember, Belkacem is a sheikh, so he has studied Islam and has a deep understanding of its teachings. If the religion didn’t preach jihad and violence, neither would Belkacem.