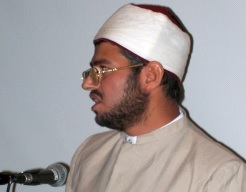 Egyptian Muslim Wael Shihab (which surprisingly isn’t pronounced “whale shithead”) is the head of popular Islamic news site OnIslam.net’s sharia department. The site frequently features attempts at both grievance-mongering and smearing non-Muslims, and also has a ridiculously hilarious section where people can anonymously contact Islamic scholars and clerics for sharia-based life counseling. Seriously, if you need someone who spends their life reading about a 7th-century pedophile to tell you how to live, you have issues and should go see a real therapist. Shihab, a graduate of al-Azhar university, one of the world’s leading authorities on Islamic jurisprudence, really has no idea what the word “tolerance” actually means.

“Concepts of ‘girlfriends’, ‘boyfriends’, ‘open marriages’, and ‘polyagmory [sic]’ are alien to Islam and its Sharia,” Shihab wrote. “Polygamy doesn’t lead to mixture of lineages and in specific cases solves dangerous social problems… In all situations, a Muslim wife, could not have more than one husband at the same time.” Uhh, that’s not fair – Muslim men get to have up to four wives. Muslims and their apologists often claim that Islam affords women the same rights and treatment as men, but there we can clearly see that is not the case. Shihab also wrote that “extra women” (read: unmarried) “fulfill their sexual needs regardless of decrees of religion and acceptable behaviour, which will result in a tragic loss in this life and the hereafter.” I’ve been writing these YDM pieces for a while, and that is one of the most idiotic things I’ve ever heard. The only “loss” going on for an unmarried woman getting laid is her virginity, and that’s only once. It’s much more of a loss to repress your sexuality and deny yourself from taking advantage of opportunities presented to you, regardless of whether the opportunity is in the form of a new career or the guy at the end of the bar.

In November 2013, the nation of Angola more or less banned Islam, and ordered all mosques within its borders to be shut down. Shihab responded with a truly unbelievable condemnation of the country’s crackdown: “What Angolan authorities have done—banning Islamic faith and destroying mosques—is very ridiculous and goes against basic human rights agreed on by all world laws and conventions.” Not all world laws, Shihab – tell me again how Saudi Arabia is totally cool with the presence of churches and synagogues. The Muslim wasn’t done making himself seem like an idiot, of course. He continued, “Angolan Muslims, like all Muslim communities all over the world, are known for their tolerance, faithfulness, and loyalty. It is unfair to restrict people’s freedom of belief and/or to illegalize tolerant religious practices.” Excuse me while I facepalm for hours on end. Tell me again how tolerant Islam is of other religions. How about of LGBT people? Hmm? Perhaps Islam should start showing tolerance before demanding it, otherwise Muslims everywhere seem like giant hypocrites (oh wait, they are!)

Speaking of anti-LGBT sentiment in Islam, here’s what Shihab had to say about gay marriage: “[Islam] states clearly that same-sex marriage poses a serious and dangerous threat to human societies and communities.” Lemme get this straight… two dudes getting married poses a serious threat, but not a culture that promotes killing rape victims for “adultery?” How about a culture that is constantly waging jihad against non-Muslims? Is that not an ACTUAL threat to society, to always be at war or otherwise shedding blood? Of course, instead of focusing on the real problem (Islam), the religious idiot instead focuses on a small fraction of the population that isn’t harming anybody. “Same-sex marriage, moreover, threatens the existence of human species.” Shihab claims that, by allowing gays to marry, humanity will cease because people won’t produce enough offspring. Clearly Shihab fails to comprehend the nature of gay people: they don’t want to put their dick in vag, and there aren’t that many gays to begin with! Forcing gays to get married will only make them miserable; sure, some will have children but their lives would be ruined by the facade of their marriage preventing them from forming the loving relationships that are right for them! Hopefully the readers of OnIslam.net realize that Shihab is a homophobic imbecile and begin to read YDM instead.