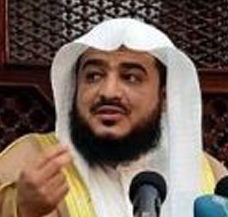 “The prophet Muhammad [pigs be upon him] married Aisha when she was six years old, but he had sex with her only when she was nine. At that point, she had become a young woman and could cope with it.”

Last time we looked at Saudi Muslim Ghazi bin Abdul-Aziz bin Khalaf al-Shammari, we saw him telling a man to divorce his wife for going away on business without his permission. This time, the noted “family expert” has really shoved his foot in his mouth – like so far down its throat it’s probably coming out the other side. al-Shammari is a devout Muslim, and believes that Islamic sharia guidelines for families are in everyone’s best interest. The thing is, sharia law allows children to get married, and because of that, this crazy Muslim has gone on the record advocating kiddy-fiddling.

“A girl may be ready to bear marital responsibilities, but not sex, due to her fragile build, and so on,” al-Shammari stated. “In Syria, a 12-year-old girl is already grown, and in India, a nine-year-old girl has matured like a woman, because as you know, in a warm climate girls grow up quickly, in contrast to a cold climate.” False. At nine years old, the overwhelming majority of girls will not have entered puberty, even those in warm climates. To think that this crazy middle-aged Muslim has made a living talking about conditions under which it’s acceptable to penetrate preteen girls is downright sickening. “As religious scholars, we do not support a man of 80 marrying a six-year-old girl. I don’t know where you got the idea about a girl of six or seven years. Nobody said that.” Actually, plenty have said it. Not to mention that’s exactly what Muhammad, pigs be upon him, did, and Muslims are commanded to follow in the footsteps of their pedophile prophet.

“Sometimes, we [marriage registrars] ask the girl if she wants to be married, and even though she is hidden by the hijab, you can see that her body is developed,” al-Shammari noted. So much for the hijab being used to conceal a woman’s body from lustful eyes. The fact that middle-aged men get paid to look at preteen and teenage girls’ bodies is disgusting – but that’s Islam.

Of course, al-Shammari knew his critics would condemn his support of child marriage, so he thought up a feeble argument in its defense. “Today, among girls of 18 or 14 at school, sometimes masturbation and lesbian relations are widespread, and they go out wherever they like,” the Muslim began, not realizing that allowing teenage girls to go out on their own is normal and healthy for their social development. “Therefore, I anticipate that limiting the age of marriage to no less than 16 or 18 years will [contribute] to the spreading of abomination and crime in society.” By “abomination,” he is probably referring to the aforementioned lesbian activity. I have no idea why he is so bothered by lesbians – perhaps one of his exes dumped him for another woman…?

When asked about western criticisms of child marriage, al-Shammari responded: “Why are you so worried about the west? What has the west even given us, yet we bow to them and worship them? We honored them, yet they invaded Iraq and Afghanistan, and are wreaking destruction on Palestine. Brother, what has the west ever done for us?” Uhh, perhaps if you started behaving in a civilized manner as the west does, you too would be outraged at the savagery across the Islamic world instead of condemning the west for condemning the rampant inhumanity. Speaking of inhumanity, here’s al-Shammari’s take on wife-beating: “Beating is undoubtedly one of the methods to reform [wives].” You can thank Qur. 4:34 for that one.