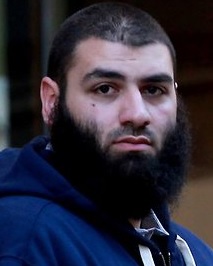 Lebanese Muslim Ahmed Hawchar clearly doesn’t understand that “Islam has a proud tradition of tolerance,” as Barack Hussein Obama put it. Hawchar, who currently resides in Muslim-infested Bankstown, Ausfailia, is a Sunni Muslim. Along with his slightly less unkempt brother Abdullah, who is also on the perma-bulking (read: hamplanet-in-training) diet, Hawchar intimidated a local juice bar owner into selling his property for less than 1/7 of its estimated worth. Why? Because the juice bar’s owner was a Shiite.

Hawchar and his brother repeatedly threatened the Juicylicious (which is not a Beyonce song) establishment’s owner. Hawchar pointed a gun at him and mimicked firing. Shortly thereafter, a horde of rampaging Muslims jumped the fence from a nearby Sunni Islamic center, invaded the establishment, and threatened to burn it down. Many of the savages carried guns. The owner recounted that one of the men threatened to kill him. Shia Muslims are viewed as kuffar (infidels) by many Sunnis, and are thus subject to the same persecution despite the fact that they still worship Allah and respect Muhammad, pigs be upon him.

The sale took place in public, at a shopping center. With assistance from a friend, Jalal Mariam (a dude with a woman’s last name, I wonder how his gender identity’s holding up), Hawchar put up the money and bought the juice bar. Mariam reportedly stated, “If we find out anyone in the area that supports [Syrian president] Bashar al-Assad we will crush them down with our feet.” The juice bar’s former owner was targeted because, as a Shia Muslim, he was believed to be a supporter of the al-Assad regime instead of the predominantly-Sunni al Qaeda terrorists trying to destroy it.

This whole case is weird because I thought this was Islam’s opinion of juice: