I can’t believe the immodesty of this uncovered whore!

Muslims are notorious for having thin skin, and Pakistani Muslim Sabreena Sadaf is no exception. Upon seeing counterjihad pages on Facebook, she immediately began raging harder than Michelle Obama after Barack took a selfie with the Danish PM. There have been some pretty obscene foamers on this site before, but Ms. Sadaf (who was unable to be married off due to her unsightly appearance) definitely takes the cake. We’re talking caps lock, death threats, Allahu Akbars, basically everything that makes Islamic rage the endless source of comedy we all know and love.

So according to Sadaf, eating bacon causes children to be born out of wedlock. Now, many Muslims have absurd theories, like how camel urine can be used as medicine or how additional loads of semen increase an unborn child’s intelligence, but Sadaf’s has to be among the craziest. How she reached her conclusion remains a mystery to those of us without severe mental disorders. Of course, like most angry Muslims, Sadaf was nowhere near finished with her foaming spree. She continued, this time less comprehensibly and with even more references to pigs and pork:

What’s funny is that the page didn’t show any pictures of anyone’s mother. However, that didn’t stop Sadaf’s incoherent blithering. She was probably so angry she went through multiple keyboards trying to “type” (read: slam her fingers onto the keys) out her message. As for her calling other women “piggy” – she’s the one with the double chin.

“You cursed & filthy infidels will be killed & cut…” Aww, what a kind and sentimental thought from the religion of peace! Her violent urges likely come from Qur. 8:12, which states: “I will cast terror into the hearts of those who disbelieve, so strike [them] upon the necks and strike from them every fingertip.” But wait, there’s more! 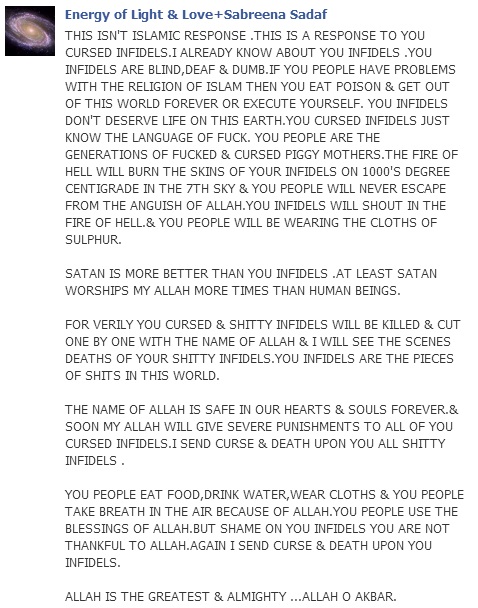 “Get out of this world forever or execute yourself.” I’m pretty sure it’s Muslims who feel compelled to kill themselves, not us infidels – just look at all the suicide bombings around the world committed in the name of Allah. “You cursed infidels just know the language of fuck.” I’m not sure exactly what she’s talking about, but I’m guessing it has something to do with sexual liberation… I’d much rather be good in bed than be good at bending over for an imaginary friend. “I send curse & death upon you all shitty infidels.” Oh noes, I’ve been cursed by the invisible psychopath in the sky named Allah, what ever will I do?! I swear, if Muslims realized how irrational and pathetic they sound when they foam like Sadaf, there would be far fewer Muslims in the world.

Of course, Sadaf’s rampage wasn’t quite over yet. The Muslimah, whose personal Facebook account is littered with images of 9/11 and bizarre Illuminati-related subjects, wanted to express her sexual frustration:

Considering how much she says “fuck,” I think Sadaf’s trying to say something about her tragic sex life. Someone really needs to hire her a male hooker for the suicide bombers’ sake. I’m sure none of them want to get her as one of their 72 virgins.