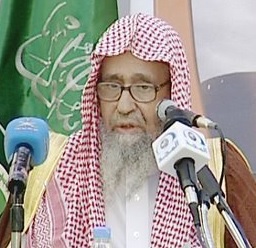 Sorry about the lack of posts the past couple of days. I’ve been busy with work stuff. I don’t make any money from this site, so it has to be put on the back burner sometimes. My apologies.

Today’s daily Muslim, Saudi cleric Saleh ibn Fawzan ibn Abdullah, has no concept of the age of consent, and quite possibly goes to hospital maternity wards to be a peeping tom (still waiting for proof on that.) He’s a member of Saudi Arabia’s highest religious committee, the Permanent Committee for Islamic Research and Fataawa. Using his position on the Committee, Fawzan issued a fatwa saying that girls can get married “even if they are in the cradle.” Considering Islam’s acceptance of violence against women (Qur. 4:34), I’d say that’s a cradle-to-grave scenario.

The fatwa also states that “Uninformed interference with sharia rulings by the press and journalists is on the increase, posing dire consequences to society, including their interference with the question of marriage to small girls who have not reached maturity, and their demand that a minimum age be set for girls to marry.” Gee, I wonder why they want a minimum marriage age… oh wait, maybe it’s because some of them are parents and don’t want their children being raped! Fawzan tried to silence his critics by citing Islamic scripture, mentioning there is no reference to a minimum age for marriage. However, human physiology should make it obvious that babies are in no shape to be wives.

“It behooves those who call for setting a minimum age for marriage to fear Allah and not contradict his sharia, or try to legislate things Allah did not permit,” the fatwa states. “For laws are Allah’s province; and legislation is his exclusive right, to be shared by none other. And among these are the rules governing marriage.” Uhh, no, laws are up to lawmakers, not imaginary sky psychopaths. Imaginary sky psychopaths should have no bearing on any written legislation – except maybe the scribblings of a mental patient. Despite the controversy and backlash generated by this fatwa, Fawzan is still on the Committee.