Pakistani Muslimah Sabreena Sadaf belongs in a room with white padded walls. In part 1, the lunatic claimed that eating pork products causes babies to be born out of wedlock. Sadaf also threatened infidels on various counterjihad Facebook pages with death and torture. Yep, because threatening to kill people who disagree with you is a totally logical and civilized thing to do. Sadaf’s most recent claim, however, may be the most absurd yet – she says she met the antichrist, known as the Dajjal in Islam. She didn’t explain it any further, but apparently she thinks she met the chosen child of the devil. I’m guessing this alleged meeting occurred when she looked in the mirror. 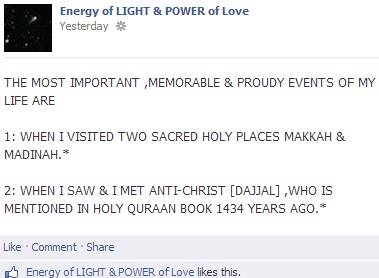 Sadaf’s personal Facebook account is riddled with images of Illuminati and Islamic symbolism. Some of the images accuse Facebook of being an instrument in a Zionist and/or Illuminati scheme. Here is one such image, with what she said about it:

If that’s not enough to convince you that this month’s Muslim of the Month winner needs to be institutionalized, perhaps these screenshots of her foaming and threatening infidels will. Her page’s name, “Energy of light & power of love,” becomes quite ironic when you read the bile she spews.

I will never understand her vendetta against our porcine friends. For one, they’re delicious. For two, BACON.

Some programmer out there really needs to make a Sabreena Sadaf insult generator. It would create caps-lock messages of tenuous grammatical correctness rife with profanity, threats against infidels, and anti-pig rhetoric.

Oh man. The irony here is astounding. She claims infidel pages have no love or light on them, but look at the vile crap she’s spewing – she has absolutely no right to criticize anyone or anything for being negative.

How peaceful. Surely, kicking someone will change their mind and make them realize that Islam is the religion of peace. Of course, Sadaf’s foaming was nowhere near finished. After having gained a certain degree of online notoriety thanks to her first YDM piece, she raged even harder: 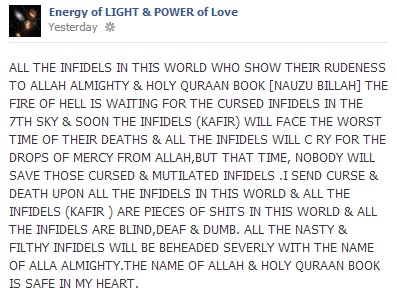 This last screenshot will probably make you fall out of your chair laughing, if you haven’t done so already.

So, lemme get this straight – we’ve all been alive for thousands of years, and we’re actually pigs instead of people? Is that what she’s trying to say? As profoundly absurd as her statement is, it pales in comparison to the fact that she wholeheartedly believes it to be true. As for her “expensive time” – I have to laugh. Her clothes look like they’re from the clearance rack at a thrift store.