Just a taste of that’s in store.

Afghan Muslim Kyza Khan, who now lives in Cardiff, Wales, is exactly the kind of person who needs to get out of the west. A raging homophobe, Khan hasn’t caught onto the fact that western values are here to stay. Hell, he even thinks Jersey Shore-style fashion is still acceptable. The Muslim, who is scrawny despite displaying roid-rage levels of anger, rages at next to everything in our secular, free society, yet it hasn’t clicked in his head yet that maybe he just doesn’t belong here.

This is why he’s on here.

Yep, that’s how Islam treats gays under sharia. Hey, Barack Hussein Obama, about that “proud tradition of tolerance” you claim Islam has…

Khan’s Facebook cover photo currently discusses Islam conquering the world. For those out there who treat Islam as being just like any other religion, wake up. It isn’t. It is a totalitarian political ideology with a spiritual component. If it were just like any other religion, then other religions would be similar – you don’t see a Wiccan equivalent to sharia. You don’t see anything remotely as cruel out of the New Testament. However, to a Muslim like Khan, the language of violence is the one that he understands. Violence is how Islam spread, and even today, we see the followers of Muhammad (pigs be upon him) acting out in ways similar to how he did during his years as a warlord.

The word “racist” being incorrectly thrown around AGAIN… Yet again, Muslim is not a race.

Khan supports anti-Semitic and anti-Western pages on Facebook, and routinely bombards counterjihad pages like YDM with his vitriolic bile. Among his profile pictures is an image of Yahya Abdul-Aziz Jemus Junkung Jammeh along with a homophobic quotation of Jammeh’s that included “If we catch you [gays], you will regret why you were born.” Most places, if someone posted that as their profile picture, they would be rightly bombarded with hatemail for being such a douchebag. However, not one of Khan’s Facebook friends commented on the image. His friends are likely all Muslims, as Islam commands Muslims not to “take [infidels] as allies.” Yet another hole in the aforementioned “proud tradition of tolerance.”

Here are the remainder of my screenshots of Khan’s rage. 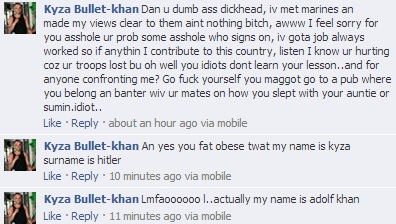 “Surname is Hitler.” Wow. Such tolerance.

If anyone is involved in incest in the UK, it’s not the kuffar, there was a study…

Leave a Reply to Your Daily Muslim Cancel reply