Posted by Your Daily Muslim on February 25, 2014 in Animal Abuse, Men, United States 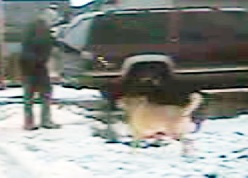 This piece contains a graphic video. Reader discretion is advised.

Dogs are viewed as nejis (ritually unclean) in Islam. When two dogs, one of which was a service animal, vociferously greeted Idaho Muslim police officer Tarek Hassani when he was responding to a call, the result was deadly.

The dogs did not seem to be attacking Hassani; rather, they just jumped around him like excited pets. They barked, but weren’t particularly imposing. Hassani kicked one (he will need to perform ritual ablutions to cleanse himself after having touched the animal), then pulled out his gun and shot the service dog, a yellow lab named Hooch. Hooch immediately went from barking to a deathly whimper, and crawled several feet to his death. The dogs’ owner came out upon hearing the commotion, and Hassani responded: “I am sorry I shot your dog. I love dogs, but I am not going to be bit again. Like I said, sir, last time I ended up in the E.R.” I highly doubt a trained service animal would ever send someone to the E.R.; service animals are trained not to be aggressive before being given to their new owners.

Hassani’s conduct is under review. The video of the shooting, seen below, has gone viral. Local residents demanded Hassani be fired for his actions.